Krabby's name is a variation on crabby, which denotes both its species and its personality.

Krabby's most notable feature are its large pincers. Krabby is an omnivore and a scavenger; it rarely hunts for itself. It can also act as a filter feeder by digesting the bacteria in sand, but this is rare. It is territorial, and in beaches where there is little food, fights between Krabby are common.

Krabby also uses camouflage; it can form mucus sacs about itself if threatened, making it seem larger or making it harder to spot against sea sand. It is usually very small, but it makes up by its aggressiveness.

Krabby can be captured in Pokémon Red and Blue, Pokémon Yellow, Pokémon Gold and Silver, Pokémon Crystal, and Pokémon FireRed and LeafGreen. In all of the above games, Krabby is able to be found with multiple methods (in grass, by fishing, by smashing rocks open) in multiple areas.

In Pokémon Diamond and Pearl it is a random daily swarming Pokémon on route 226. It can only be found swarming once the national dex is obtained.

While training Krabby for evolution into Kingler at level 28, its extremely lopsided stats are apparent: It has very good attack and defense stats offset by below average speed and terrible HP, Special Attack, and Special Defense. It can Knock Out wild Pokémon rather easily with physical attacks like Vicegrip and Stomp, but its otherwise powerful Water-type move Crabhammer is hampered by its extremely low Special Attack. Luckily, the physical/special split in Diamond and Pearl makes Crabhammer much more useful. When Krabby evolves into Kingler, every one of its stats is incremented by 25.

Krabby first appeared at a beach in episode 13, Mystery At The Lighthouse, when Ash Ketchum wanted to prove that he could catch a Pokémon alone. After the capture (which involved Krabby attacking Ash's finger), it was automatically transferred to Professor Oak's lab, because Ash already had 6 Pokémon with him. To Ash's great surprise, Gary had also caught another Krabby, which was much larger than his.

Krabbys in general appear to enjoy pinching other living beings: In episode 17, The Island of the Giant Pokémon, a Krabby happily pinches Team Rocket, waking them up and in episode 68, The Evolution Solution, another Krabby pinches both a Slowpoke and Psyduck, making the latter yell in pain.

Throughout the series, Ash's Krabby stayed with Professor Oak, demonstrating his cheerful nature. Ash managed to meet him in Episode 67, Showdown at the Poke-Corral!, where he also saw Gary's one.

Ash used Krabby in his first battle at the Indigo Tournament, in episode 77, Round One - Begin!, against a trainer called Mandy. Krabby won against an Exeggutor and evolved into Kingler, who also won against a Seadra and a Golbat, despite the fact that Krabby had never battled before.

Ash also used it in the Whirlpool Tournament, and since then, Kingler has been living at Professor Oak's lab along with Ash's other Pokémon that were not brought to Sinnoh or the revisit to Kanto.

Red catches a Krabby in Pokémon Special which he trades for Misty's Gyarados. Misty later saves a Krabby trapped in Tohjo Falls in Volume 12. This act of kindness prompts Suicune to pick Misty as his trainer, besides her being the expert for Water-type Pokémon. 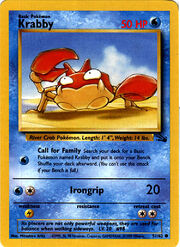 Krabby and his evolution, Kingler, made their first appearance in a Premade Deck from the "Fossil" version, called "Lockdown". His next version, from the "Expedition" set, is, arguably, the best one (being capable of doing 30 points of damage, a lot for a basic Pokémon). Although the Krabby from "EX FireRed & LeafGreen" version can't do so much damage, it has the advantage of healing himself with the "Nap" attack, meaning that it can keep healthy until it evolves.