The creature Kraid is a reoccurring boss from the Metroid series. He debuted in the original Metroid NES game. He has since appeared in Super Metroid and Metroid Zero Mission.

In Metroid, Kraid served as one of the bosses you have to defeat (The other being Ridley) to get to the Mother Brain). After fighting a weaker fake Kraid, you later fight the real one. It is not clear what Kraid is to the Space Pirates. He is never indicated to be a leader of the Space Pirates like Ridley but Kraid might have been a monster that has been captured by the space pirates and used to do ther labor and protect them from intruders trying to stop them.

In the NES version, Kraid is a normal sized, reptilian creature, just a little bigger than Samus Aran. By the time he reappears in Super Metroid, he has grown to the huge size seen on the left. It is never explained why the drastic change in size took place, but in the remake of Metroid (Metroid Zero Mission), the small version of Kraid was scrapped. He is given an appearance just like the one in Super Metroid. This supposedly makes it so that he doesn't seem to grow at insane rates in between Metroid and Super Metroid. It is thought that Kraid back then was just a spawn and grown to a massive size as he grew, however this idea was thrown into question after Metroid Zero Mission. 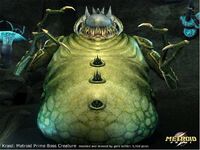 Kraid, as cut from Metroid Prime

Kraid himself is a stage in Super Smash Bros. Melee. Well, almost. The stage is Brinstar Depths, a small block floating above lava, with Kraid in the background being scary. Kraid will occasionally reach forward and hit the stage, making it rotate.

Another interesting note, Kraid was originally supposed to be a boss in Metroid Prime, somewhere around the Phazon mines. The model was created, but was scrapped by Retro Studios due to time constraints. The image on the right shows the Kraid model. It is believed the boss battle would revolve around getting his helmet off. This version of Kraid was said to be called Omega Kraid and was scrapped by Retro Studios because they didn't want to push back the release date any more. When die-hard fans learned of this, they were hoping that Kraid would be in the sequel, Metroid Prime 2: Echoes, but he was not.