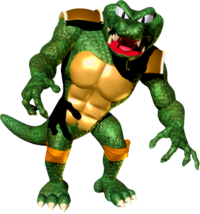 Kritters (also referred to as Kremlings[1]) are one of the 3 Kremling subspecies and major from Crocodile Isle population in Donkey Kong series.

In Donkey Kong Country, Kritters from Kremling Krew wears a set of useless shouldpads. In Donkey Kong 64, all Kritters wear black leather vests with a human skull-and-crossbones emblem in back, but some varieties have different additional pieces. As of DK: King of Swing, DK: Jungle Climber, Donkey Kong: Barrel Blast and Mario Super Sluggers, Kritters use spikes forearms, belts with skull buckle and ocher pants.

Several elements shown in Crocodile Isle and Kremlantis that Kritter subspecies is more dominant from Kremling species with many different members and many sizes.

According to the Lost World, their history was stored in this place where several Kritter statues as a tribal society.[2] Undead pirates as Kloak and Kackle as Kritters as well. K. Rool, the pirate Kremling who founded the paramilitary pirate organization Kremling Krew becoming king of Kremlings and rule his own island, is a Kritter.[3]

Skinny (most common), fat or small Kritters are weak that can be defeated by any Kongs attack. Muscular, large or burly members are quite invincible to the attacks of weak characters.