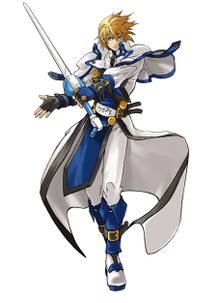 Ky Kiske is the second main character in the Guilty Gear fighting game series, having appeared in every game to date. He is also a well-storied character, due to his involvement in the events prior to the first game.

He is extremely talented in tactics, sword fighting, and magic; the novel Lightning the Argent reveals that his ability to create lightning projectiles from his sword Fuuraiken is extraordinary, as lightning is the most difficult magic to control. Ky is also a man filled with devotion to God, and to maintaining peace and justice after the war. Investigating his superiors is not beyond Ky if he believes them to be undermining his concept of justice. He is highly compassionate and chivalrous and will hold back against female opponents if he is forced to fight them. Ky does have personality flaws: morally, he sees only in black and white and not in shades of gray. However, he is working to adjust.