It was developed by Traveller's Tales for the Xbox and PlayStation 2 video game consoles and Microsoft Windows PCs, with Griptonite Games developing the Game Boy Advance version. These initial versions were published in April 2005. A Mac OS X port, developed by Aspyr, was released in August 2005. A GameCube version of the game was released on October 26, 2005. All versions were published by Eidos Interactive and LucasArts.

Though LEGO Star Wars was billed as a "kid's game" and received the "Game of the Year" award from Kidzworld.com, it received positive reviews and peaked at the top of the UK charts during early May 2005. It later lost that spot to the official game of Star Wars Episode III but still maintained a consistently high chart position throughout the month.

A sequel, LEGO Star Wars II: The Original Trilogy, was released in September 2006. LEGO Star Wars: The Complete Saga was later released on the November 26, 2006. 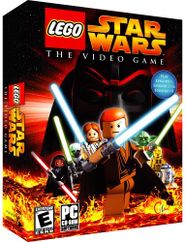 LEGO Star Wars contains a total of 56 playable characters. The playable characters are modeled like actual LEGO parts (but with far more mobility) and are divided into groups according to certain skills. The groups are as follows:

Jedi - These characters as expected carry a lightsaber with them and are able to use the force on certain LEGO pieces around the levels. Examples are Yoda or Anakin Skywalker (Padawan).

Blasters - These characters carry small guns with them used to shoot people from a distance. They can also grapple up to higher ledges using their guns. Examples are Captain Panaka or Queen Amidala.

Droids - Friendly droids such as R2D2 or C3PO will be used to open doors for you.

Sith - The Sith are exactly the same as the Jedi except for the fact that they can use the force on objects that are made out of black Lego. Examples are Darth Maul or Count Dooku.

The game also adds a collecting nature to the game in the form of minikits and True Jedi Status. Minikits are small collectables and there are ten in a level. Once you have collected all ten you will earn 50,000 studs and a vehicle in the car park. Unfortunately, you cannot ride them. True Jedi Status is received by collecting a set amount of studs inj a certain level. Once they are all achieveved the New Hope scene will be unlocked and Darth Vader and a Stormtrooper become unlocked as characters. Princess Leia and a Rebel can then be bought over the counter.

There are a wide variety of characters included in the game, all of which are unlocked by completing levels or by purchasing them at Dexter's Diner. Every character, other than the PK Droid, the Gonk Droid, and Chancellor Palpatine has a special ability, such as extra high jumping, control of the Force, or the ability to grapple. Droids, while not being armed, can travel through the game unimpeded (i.e. they won't be intentionally attacked by enemy characters); as well, protocol droids and astromech droids can open special doors. Also, unlike other armed droids, player-controlled Battle Droids will be ignored by hostile Battle droids but not Droidekas. The Gonk droid is also indestructible.

Unlocked characters can be imported into the game's sequel, LEGO Star Wars II: The Original Trilogy, as an extra costing 250,000 Lego studs.

Because LEGO Star Wars is based on the Prequel Trilogy (Episodes I, II and III), Luke Skywalker, Han Solo, Princess Leia Organa and other characters from the original Star Wars trilogy are not shown, appearing in LEGO Star Wars II: The Original Trilogy.

This game was released before Star Wars Episode III: Revenge of the Sith, possibly driving sales up as the basic plotline was present in the game. To prevent inadvertent spoilers however, most reviewers warned that this was the case in their reviews.

Dexter's Diner is the area from which the player chooses what level to enter, view any vehicles whose parts they have found. Lego Star Wars also has a feature called 'free play', which enables the player to play the same level again, but with the ability to switch between characters, thus get into areas containing extras the player was unable to get before. In Free Play mode, a player may use any character they have unlocked. The player may also match up good and evil characters, such as Qui-Gon Jinn and Darth Maul. The free play option will only appear when the player finishes a level. Levels that are played in vehicles cannot be played in free play, but are able to be replayed in story mode like all the others. Some characters, such as Chancellor Palpatine, the PK Droid, and the Gonk Droid, can't do anything but walk, although they are never attacked in the case of PK Droids and Gonk Droids, giving them the ability to traverse the levels unharmed. Also in the diner, you may purchase unlockable extras for studs.