Lakitu, like Yoshi, is both a species and the name a character found in the Mario series of games. He is the sometimes enemy of Mario. To mask the devilish intent of the Lakitus in the earlier games they ride around in smiley clouds of love and happiness. He hides a neverending supply of Spinies in his protective white fluffy cloud, which he chucks at Mario. Most Lakitus seem to have so enjoyed the feeling of freedom the puffy clouds afforded them that they decided to keep them for the more recent games. In terms of his fondness for Mario, Lakitu has a change of heart in more recent games, he starts races (and fishes out racers when they fall into pits or deep water) in Super Mario Kart and in Super Mario 64 he records Mario's struggle against Bowser with a camcorder. 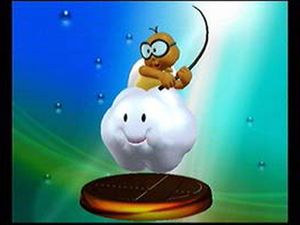