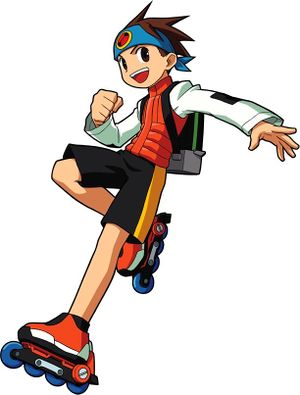 In the future, rollerblades are popular again.

Lan Hikari is the co-star of the Mega Man Battle Network series, along with his NetNavi, MegaMan.EXE. His father, Doctor Yuuichiro Hikari, invented NetNavis, and his grandfather, Doctor Tadashi Hikari, invented Cyber World. Lan's adventures are set in the real world, whereas MegaMan.EXE exists in Cyber World. He often finds himself saving the world, and usually is usually aided by his friends Mayl, Dex, Yai and Chaud.

When Lan was born he had an identical twin brother, Hub Hikari, who had a heart condition. Hub died as an infant, and Lan's father used an experimental process to digitize his DNA and recreate his body in Cyber World. When he did this, Hub's soul reentered the body of this Navi, and they gave him an outer shell so he'd look and act like any other Navi. Hub is MegaMan.EXE, and Lan wasn't aware of this (MegaMan, however, was) until the end of the first game. Lan's father explains that if he knew MegaMan was his brother, Lan might hold back in battle and err, but now that he understood MegaMan's full potential, he knows telling him won't inhibit him in combat.