Lanturn (ランターン, Rantān, Lantern in original Japanese language versions) is one of the 493 fictional species of Pokémon from the Pokémon Franchise – a series of video games, anime, manga, books, trading cards and other media created by Satoshi Tajiri.

The name Lanturn is a corruption of the word lantern, because Lanturn, like a lantern, emits light.

This anglerfish/dolphin-like Pokémon uses the bright part of its body, which gradually evolved from a dorsal fin, to lure prey. The light it emits is so bright that it can illuminate the sea's surface from a depth of over 3 miles. It uses this light to attract and blind prey, and then swallow the immobilized prey in a single gulp. The light is also useful for Lanturn to navigate through the deep, murky waters.

The light from its antenna is produced by bacterial symbiosis. Bioluminescent bacteria in Lanturn's antenna cause a chemical reaction with Lanturn's bodily fluids to create the bright light.

Lanturn is nicknamed the "deep-sea star" as its light is so bright that, even from the bottom of the ocean, a large number of Lanturn make the ocean look like a starry night-sky.

Lanturn made its first appearance in Pokémon Gold and Silver, and is the final form in the Chinchou evolutionary line. It is the evolved form of Chinchou. It's HP is it's best stat, hitting over 450. However, it's other stats are decidedly sub-par. It is known for being a terrific annoyer.

In the episodes The Mystery is History, A Parent Trapped, and A Promise is a Promise, a Lanturn was used to sneak onto Team Rocket's underwater base and free Lugia. It also made an appearance in Lapras of Luxury where it was used to find Lapras as a radar, similar to Zubat's supersonic.

In Volume 12, Misty uses a Lanturn to fight Suicune in the Tohjo Falls. 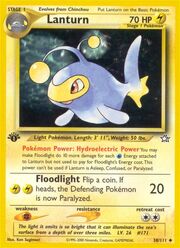 Lanturn has had many appearances in the Pokémon Trading Card Game, particularly because it is a treasurable Lightning-type Pokémon that blends Lightning and Water elements. It has made all the following stage-1 appearances, Lightning-type unless stated otherwise: