Lapras (ラプラス, Rapurasu, Laplace in original Japanese language versions) are one of the 493 fictional species of Pokémon creatures from the multi-billion-dollar Pokémon media franchise—a collection of video games, anime, manga, books, trading cards, and other media created by Satoshi Tajiri.

Lapras can be considered an alternate Romanization of the Japanese name Laplace, which is a reference toward Pierre-Simon Laplace, a mathematician who wrote several books on the mathematical properties of the sea and tides. Its English name was originally going to be Nessie, which is clearly derived from the Loch Ness Monster.

Lapras looks very similar to a plesiosaur, a prehistoric creature which lived in the oceans from the late Triassic period to the late Cretacious.

Lapras has a tough, light blue skin and an off-white underbelly. Its ears are curled, has a small horn which seems to serve no true purpose on its forehead, a dark grey spiked shell on its back, and four flippers. Even though Lapras seems gentle, it has a sharp array of teeth that may suggest that it is a carnivore, or they could just be for defending itself from other Pokemon.[citation needed]

Lapras is an endangered species. The reasons for this are many: Lapras provide a comfortable and swift method of transportation across water by riding on their backs, and are almost too willing to do so. They also become entangled in fishing nets often. Furthermore, they have a gentle, pleasant personality and intelligence high enough to understand the meaning of human speech. As a result, Lapras is a highly sought-after Pokémon.

The high demand for Lapras has led to their overhunting in the Pokémon world. Due to their peaceful nature, Lapras rarely fight back, posing little challenge to trainers and poachers despite their large size and mass would give them an advantage (it is possible that wild Lapras rely on their size and potentially aggressive looks to keep attackers away rather than fight back). The continuous capture of Lapras over time has caused its numbers to dwindle, driving it to the brink of extinction. Now, a Lapras is far more likely to sing in a plaintive, mournful cry rather than the happy ones it is known for, as it tries in vain to find others of its kind. Preservation efforts seem to exist, but their effectiveness is unknown.

In Pokémon Red, Blue, and Yellow, the player receives Lapras as a gift after beating the Rival in the Silph Co. Saffron City headquarters. In Pokémon FireRed and LeafGreen it is also encountered in the Icefall Cave (very rare).

In Pokémon Gold, Silver, and Crystal, one Lapras appears every Friday (according to the game's internal clock) in Union Cave. If caught or defeated, another will appear next Friday. Also, whenever a Pokemon uses Surf in the field, it will look like a Lapras.

In Pokémon XD: Gale of Darkness one could be snagged from Cipher Admin Eldes at Citadark Isle.

Lapras can be found in the Nintendo 64 game Pokémon Snap in the Beach Course. At three separate points throughout the course, Lapras can be photographed far off shore. If the first two are snapped, a third Lapras will appear near the end of the course much closer to the camera.

With the coming of Pokémon Diamond and Pearl, many people believed that a new Pokémon called Shellos was Lapras' pre-evolution. This was due to the similar body structure, in addition to it being a Water-type Pokémon like Lapras. However, this rumour later turned out to be false, as it was confirmed that Shellos has an evolution (Gastrodon), and Lapras isn't in the Sinnoh Pokédex at all. Lapras can be caught in an extra room that opens up in Victory Road after obtaining the National Dex.

in Pokémon Diamond and Pearl, Lapras can be found while Surfing in the section of Victory Road that leads to Route 224. However, the player may catch Lapras after going through the tunnel with a Shaymin-based trainer named Marley.

In Pokemon Ranger, near the harbor at Fall City, the hero/heroine (Lunick/Solana respectively) meet with a man and his Lapras, and he/she manages to befriend it, and they can then ride the Lapras from Fall City to Summerland.

Lapras first appeared in episode #65 (Holiday Hi-Jynx), where it enlisted Ash and his friends on behalf of Santa Claus to find one of his lost Jynx. This Lapras showed the extraordinary trait of communicating telepathically in human language, despite not having any psychic powers. This ability may have been due to its relationship with Santa Claus. This episode is no longer shown on American TV however due to portrayal of Jynx, which some interpreted as mocking Africans using a style similar to blackface.

The Lapras species was featured much more prominently during Ash's travels around the Orange Islands region. Shortly after arriving, Ash found a small Lapras which had been accidentally left behind by its pod and rescued it from some unscrupulous trainers and Team Rocket.

Afterwards, Lapras joined the protagonists and transported them all around the Orange Archipelago until they found its family. It was also used in some of Ash's Orange League battles. Lapras was finally reunited with its fellow Lapras and left Ash. They met up again in Johto (episode # 259-Lapras of Luxury) where Lapras rescued its entire pod from Team Rocket and became its leader.

Pryce, the gym leader of Mahogany Town, also owns a Lapras. However, he did not use it in his battle against Ash.

Later, Lapras is used in the Kanto Grand Fesitval by Solidad (Saori in original Japanese), one of May's rivals, who wins the Fesitval.

Lapras is voiced by Rikako Aikawa in the original Japanese version of the anime.

The most notable role of Lapras in Pokémon Special was being one of the Pokémon of Pryce. In his youth, Pryce lost two of his favourite Lapras in an avalanche, just as the egg borne by them hatched. Unable to get over his loss, Pryce swore to save his Lapras and thus began researching into time travel, setting the events of the Johto saga in motion. Eventually, Pryce was able to capture Celebi and enter time, only to lose Celebi as the Poké Ball containing it was shattered, causing him to be unable to override time any further. However, the baby Lapras, Hewger, was able to enter the time in which Pryce's Lapras were separated, and the family enjoyed a happy reunion while Pryce was eventually lost in time.

In The Electric Tale of Pikachu, Ash saves a Lapras from a swarm of Krabby tormenting it. Like in the anime, Ash used this Lapras as a mode of transportation through the Orange Islands saga. It is not known in this version if he releases it. 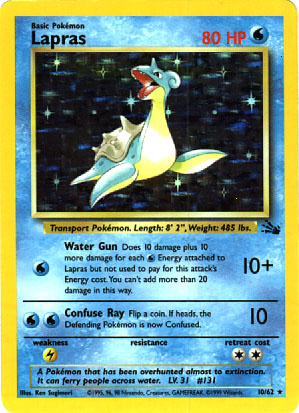 Lapras, as seen in the Pokémon Trading Card Game

Lapras, despite being of the first generation of Pokémon, has appeared only five times as Basic Water-type Pokémon in the Fossil, Southern Islands, Aquapolis, EX Ruby & Sapphire (as Lapras EX) and EX Legend Maker sets.