Lara Croft is the female heroine in the Tomb Raider series. She is also prominently featured in comic books and feature films. Her first game, Tomb Raider, was a successful and key PlayStation game. Some believe that her success is thanks to the sexually appealing design by Tony Gard, a character design at Core, instead of the quality of the gameplay or depth of the character.

Since her success (which spawned two films starring Angelina Jolie), many action games aimed at a young male audience starring scantily clad heroines have been released. 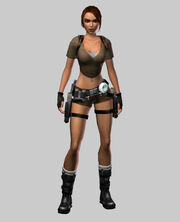 Lara Croft is depicted as an athletic woman; she has brown eyes and hair, frequently kept in a plait or ponytail. The character's classic costume is a turquoise sleeveless tank top, light brown shorts, calf-high boots, and long white socks. Accessories include fingerless gloves, a backpack, a utility belt with holsters on either side, and two pistols. The video game sequels introduced new outfits designed for different environments, such as underwater and cold weather. In other games Lara Croft wears a crop top, camouflage pants and black or light brown shirts. Game manuals describe the character as the Wimbledon, London-borne daughter of the fictional Lord Henshingly Croft. She was raised as an aristocrat and betrothed to the fictitious Earl of Farringdon. Lara Croft attended the Scottish boarding school Gordonstoun and Swiss finishing school. A plane crash left the character stranded in the Himalayas for two weeks; the experience spurred her to shun her former life and seek other adventures around the world. Lara Croft wrote guide books and other published works based on her exploits as a mercenary, big-game hunter, and master thief. The backstory was later changed to include her mother in the plane crash. While searching for shelter against the elements, Lara Croft witnesses her mother vanish after tampering with an ancient sword. Her father disappears in search of his wife

Core Design first handled development of the character and the series. Inspired by pop artist Neneh Cherry and comic book character Tank Girl, Gard designed Lara Croft to counter stereotypical female characters. The company modified the character for subsequent titles; modifications included graphical improvements and gameplay additions such as new manoeuvres and in-game items. Poor reception to the 2003 sequel Tomb Raider: The Angel of Darkness resulted in a switch to American developer Crystal Dynamics. The new developer rebooted the character along with the video game series. Crystal Dynamics focused on making the character more believable, and altered her physical proportions and capabilities to interact with game environments. Lara Croft has been voiced by four actresses throughout the video game series: Shelley Blond, Judith Gibbins, Jonell Elliott, and Keeley Hawes.

Critics consider Lara Croft a significant game character in popular culture. She holds two Guinness World Records and has a strong fan following. The character's debut was well received by the video game industry, but her popularity slowly declined until the series' reboot in 2006. While the rebooted games were generally well-received, Lara Croft's redesign was met with mixed responses. Lara Croft is also considered a sex symbol, one of the earliest in the industry to achieve widespread attention. The character's influence in the industry has been a point of contention among critics.

A list of the many women to have dressed up as Lara Croft.