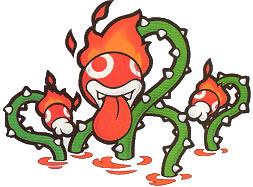 The Lava Piranha the boss of the 5th Chapter in Paper Mario.

The Lava Piranha plant is a giant piranha plant that lives inside the volcano at Mt. Lavalava. There are two lava buds next to him that also damage Mario, but an attack can knock them out for a few turns. The Lava Pirahna has the ability to spit fireballs, while the buds can summon small flameballs that attack. Once Mario beats Lava Pirahna, it slithers back into it's hole, and the victory fanfare plays, however the ground starts to rumble and the Lava Pirahna, arises, now on fire making jumping impossible.

Due to having to fight him twice, Lava Piranha is regarded as one of the hardest bosses in the game. The player should be stocked up on Snowman items, and have the Ice Stomp badge equipped. Sushie should also be Mario's partner. The hardest part of the boss fight is the second stage as jumping, unless equipped with the proper badge, is useless. If Sushie has the "Tidal Wave" ability, she can knock out all three of the enemies.