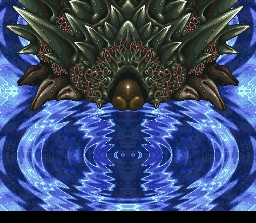 Koopa shells ain't got nothing on this.

Lavos is not a nice guy. In fact, he might not even be a guy. He's a giant spikey shell boss that can destroy the world. He comes from the game Chrono Trigger. Lavos crashed into Earth (Meteor style) in 65 Million BC. He dug deep into the Earth and hibernated for millions of years, until 1999 AD, where he came out and brought forth apocalyptic rain and all that badness. The main goal in Chrono Trigger is to prevent this from happening. The name comes from Ayla, a prehistoric woman who witnessed Lavos crashing into the Earth. "La" means big, "Vos" means Fire, according to their primitive caveman language, even though they all speak normal English too.

It's unconfirmed exactly what Lavos is, but it's clear that the spikey shell is more like a vehicle or armor for the true Lavos. When you defeat his outer shell, your team ventures onward inside, and meets a large almost robotic torso, connected with many wires to the wall, implying this is the being inside Lavos that controls it. But then you defeat that "heart", and reveal an even smaller, almost human sized, alien that was inside the previous suit. So it's best to assume Lavos is an alien inside a suit that controls a giant spikey shell.

In 12,000 BC, Queen Zeal wanted to harness the power of Lavos, which is kind of a bad idea. She used the underwater Mammon Machine to grant herself and her followers powerful magic, which they also used to make the Kingdom of Zeal float high in the air. There were three wise men who objected to this and saw the temptation of Lavos as a coming disaster: Belthasar, Gaspar, and Melchior. As a result they were each teleported around in time by Lavos. He went back into the earth to hibernate following the destruction of Zeal.

In Chrono Cross, Lavos becomes The Devourer of Time as a result of, I think, absorbing Schala when she stayed behind as Lavos destroyed Zeal.