Ledian's name is a misspelling of "ladybug". It also appears to incorporate "alien" into its name, owing to its head which appears similar to greys. It could also be a reference to the Chinese character 点 (pinyin: dîan), meaning dot, which is a play on the spots on its back. It could also be derived from Median, a mathematical term referring to the fact it, and Ledyba, have spots that are said to have a mathematical connection.

Ledian is a moderately large, bipedal ladybug-like creature with a huge head and six small limbs. It also has star patterns on its back which oddly grow larger or smaller depending on the number of stars visible in the night sky. Each spot represents a corner of a star shape. These spots have also been observed glowing red during twilight hours as Ledian are attached to trees, making these trees seem like Christmas trees.

Ledian is a nocturnal insect, active mainly during the night and sleeping in curled-up leaves during the day. Countless Ledian live in outdoor areas located a good distance away from the polluted atmospheres of cities, for the star-lit skies are always clearer in these clean lands than in the light pollution of urban areas. Ledian have an affinity to stars for good reason; They take their energy from the light of the stars in order to live healthy. When many stars are visible, the Ledian will sprinkle a mysterious, glowing powder whilst fluttering about.

In Pokémon Diamond and Pearl, Male Ledian are shown having longer antennae than Females.

Ledian first appear in Pokémon Gold and Silver. They can only be obtained by evolving Ledyba at level 18. In Pokémon Colosseum, a Ledian was made available for snagging from Cipher Peon Kloak.

Ledian have a low Attack stat, which is negatively affected by the fact that they mostly learn physical attacks. Ledian are able to learn such supplementary attacks as Agility and Swords Dance, increasing their Speed and Attack stats respectively. These are then transferred through the use of Baton Pass, a move allowing the user to pass stat changes on to other Pokémon. Ledian can learn Reflect, Light Screen, and Safeguard; coupling that with their excellent Special Defense makes them primarily defensive Pokémon. They can learn the attack Silver Wind, and even more powerful Bug attacks in the Diamond/Pearl Pokémon games. They can also be taught Aerial Ace, a flying move, for STAB (same type attack boost) since Ledian is Bug/Flying type.

Ledian first appears in the episode "Mountain Time". The Ledian is being used by its owner to test the wind gusts in a valley. Naturally, Team Rocket attempts to capture the Ledian. It also appears in "Houndoom's Special Delivery", in which they fly pass Houndoom and Togepi.

In Volume 9 of the Pokémon Special manga, Team Rocket possesses a group of Ledian as a part of their Pokémon army during their invasion of Ecruteak City. 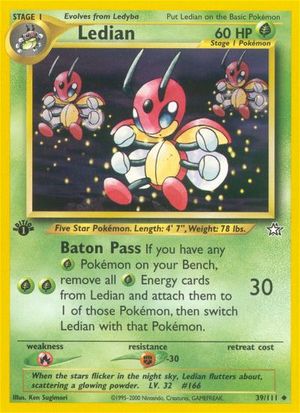 Ledian has appeared in several sets in the Pokémon Trading Card Game. These sets include: