Ledyba's name is a is based on the word ladybug.

Ledyba resembles a ladybug. It has a red thorax with black spots, a cream-coloured underbelly, six legs and two black antennae.

By itself a Ledyba is very timid, to the point of being afraid to move. When Ledyba become part of a swarm, they become much more active and can cluster next to each other for warmth in cold weather.

A Ledyba communicates with others through an aromatic fluid excreted from the points where its legs meet its thorax. By subtly changing the fluid's scent, the Ledyba can convey a number of different feelings. The fluid can also help to determine a Ledyba's location as well as its current feelings.

In Pokémon Diamond and Pearl, male Ledyba are shown having longer antennae than females.

In Pokémon Silver and Crystal, Ledyba are one of the few Pokémon that can only be found in the morning. In Pokémon XD one could be snagged from a guy at Gateon Port early in the game.In Emerald it could be found in the Safari Zone. Ledyba is also available in leafgreen on six island in green paths forest.

Ledyba's stats, like many Basic-stage Pokémon, are quite low - except for its rather high Special Defense. It doesn't naturally learn many particularly strong attacks, so using it in battle can prove to be a challenge. In fact, during the second generation, Ledyba and its evolved form Ledian couldn't learn any Bug or Flying attacks, despite their types - Bug or Flying attacks would have given it Same Type Attack Bonus, increasing Ledyba's effectiveness in battle. One may try assigning it a supportive role: a Ledyba could buy time through disrupting moves (Supersonic or Attract, for example) to augment its stats with moves like Agility and Double Team and finally pass these benefits to another teammate using Baton Pass. Chronologically, Ledyba could be the first Pokémon whose design inspired the "Baton Pass" strategy. In Pokemon Emerald, Ledyba can be caught at the Safari Zone, and evolved into Ledian at the next level, just like most of the other Safari Zone Pokemon.

The Ledyba species is featured in episode #130 (The Whistle Stop). Six Ledyba, owned by a girl named Arealle, work with her to transport trainers across a river under the commands of a high-pitched whistle.

In Pokémon Special, Professor Oak has a Ledyba since the beginning of the Gold, Silver and Crystal saga. 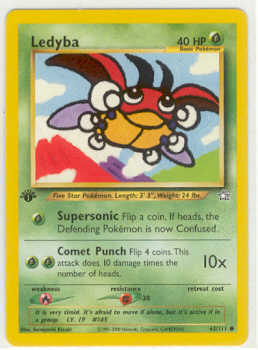 Ledyba has made a few appearances in the TCG as a basic grass type pokémon in the following expansions: