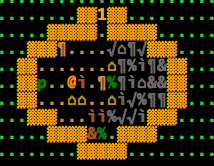 This building... is a giant pumpkin! Shown here are the player @, the shopkeeper-farmer p, and several items for sale.

You have lived in an underground prison cell for as long as you remember. One day, you awake, smell blood, and notice that the door to your cell is unlocked. Thus begins your adventure through the mysterious world of "Phenomedom". The game is Legerdemain by Nathan D. Jerpe; it is a roguelike for computers with Java.

The game is gratis, just go to http://roguelikefiction.com and play. The source code is not available, thus one must play the game to learn the plot and secrets.

Because Legerdemain is in Java, it draws itself using an "AWT" window. Java has a powerful two-dimensional graphics engine, supporting both vector graphics and bitmaps, but Legerdemain chooses to draw only text, thus following the path of older roguelike games. (In contrast, CastlevaniaRL uses the Java curses library to draw to a text-only Unix terminal or Windows console; thus CastlevaniaRL does not have access to Java's graphics and must be a text-only game.)

Legerdemain does use a large character set. Whereas other roguelike games use the letters a to z and A to Z to represent monsters, Legerdemain often uses accented characters. This is in addition to using colors. For example, an aquatoad is a blue 'ä' character.

New players might not notice this, but Legerdemain allows a player to "preserve" a game and avoid permanent death.

As in other roguelike games, the player must create a character. The game lasts as long as the character can stay alive. Death is permanent and forces the player to start a new game, unless the player can find some way to "preserve" the game.

The hero can follow one of five schools: Logos, Chronos, Bios, Chaos, Necros. When creating a character, the player cannot choose the school directly; the player must answer multiple-choice questions so that the game can choose the school of the hero. The school affects the initial stats of the character.

Legerdemain defaults to using the numpad for to move the hero; "num lock" should be off. However, a configuration option (reachable from the main menu) allows the user to disable the "standard keyset" and play with the [yuhjklbn] keys like in Rogue. The yuhjklbn keys are more useful for players who prefer that style or who lack a suitable numpad. 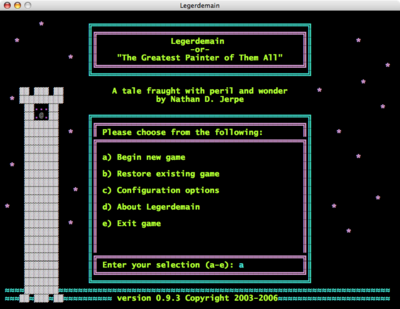 This is the opening screen. From here one can create or resume a character. 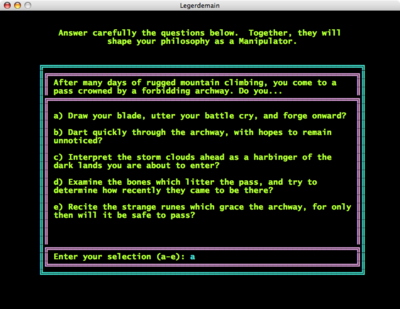 To create a new character, players must answer several multiple-choice questions about themselves. This is one of them. 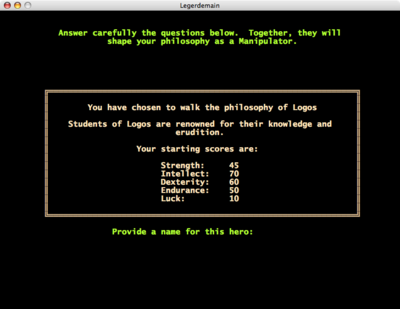 A new character belongs to one of five schools and receives starting scores for Strength, Intellect, Dexterity, Endurance, and Luck. 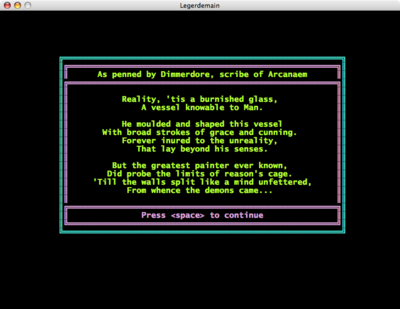 This is the epigraph of Legerdemain. 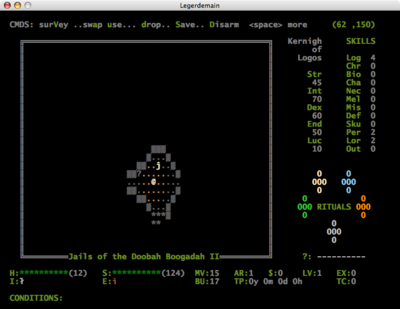 Gameplay starts in the Jails of the Doobah Boogadah II. 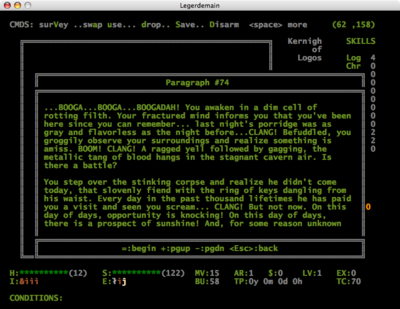 The new hero evaluates the situation.