Leisure Suit Larry in the Land of the Lounge Lizards is a computer game first released in 1987, the first part of the Leisure Suit Larry series. It was a completely graphical adventure game with 16 color EGA graphics. It used the Adventure Game Interpreter (AGI) engine. It ran on DOS and the Apple II and was later ported to other platforms such as the Amiga, Atari ST, Apple IIGS and the TRS-80 Color Computer.

In 1991, Sierra released a remake that used the Sierra's Creative Interpreter (SCI) engine with 256 colors and icon-driven (as opposed to text-based) interface. 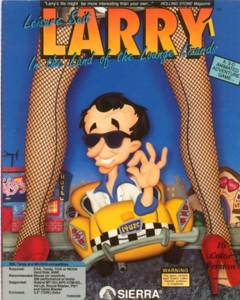 Larry Laffer is a 40-year old virgin. After leaving behind his geeky life, he decides to visit the sinful city of Lost Wages (a reference to Las Vegas), experience what he hasn't lived before, and find the woman of his dreams.

Locations within the city of Lost Wages include a casino-hotel, a disco, a convenience store, a cheap vegas-style wedding chapel, and Lefty's Bar. Larry's quest involves four women: a prostitute (which leaves Larry's need for love unsatisfied), Fawn (a material girl of low moral fibre), Faith (a faithful girlfriend of someone who is not Larry), and Eve (Larry's girl for this game).

An important part of the game is that the player has to take care of his money, which is spent whenever he travels by taxi or buys things. A way to augment the amount is to gamble in the casino, playing Blackjack or slots, which is obligatory at least twice during the course of the game.

Al Lowe, a former high school teacher, had established himself at Sierra with his work on Disney-licensed edutainment titles, Winnie Pooh in the Hundred-Acre Woods, Mickey's Space Adventure, Donald Duck's Playground, and The Black Cauldron, which he wrote, designed and programmed.

"In a time when 'humorous computer game' was an oxymoron and risqué material was a lo-res lo-cut neckline, Leisure Suit Larry in the Land of the Lounge Lizards created quite a stir among computer users," according to Space Quest designer Mark Crowe, who contributed to the game's design.

Even Sierra management was unsure about how the game might be received and released the game without any publicity or advertising budget. Many of the large computer chain stores refused to sell it, finding the content unacceptable for their customers. Unsurprisingly, its first-month sales were lower than any new Sierra product launch in years. However, word-of-mouth quickly spread. By year’s end, Leisure Suit Larry in the Land of the Lounge Lizards became a critical and commercial success, being named the Software Publishers Association’s "Best Fantasy, Role Playing or Adventure Game of 1987" and selling over 250,000 copies.

Because of the adult nature of the game, it featured an age verification system, which consisted of a series of questions to which the authors reasoned only adults would know the answer. As the questions were U.S.-centric, they frustrated some non-American gamers. (The verification system could be skipped by pressing Alt-X.)

Leisure Suit Larry in the Land of the Lounge Lizards is believed to be one of the most widely pirated PC games of the late 1980s. Sierra sold many more hint books than it did actual copies of the retail game. Curiously, although the game never sold in Russia, a few copies slipped through the Iron Curtain and soon many thousands of illegal copies were circulating, with students playing it on university PC's and exchanging hints on how to progress through the game.

Today, the game is regarded as the first adult graphic adventure.