Lemmy is one of the Koopa Kids. He sports rainbow hair and often balances atop a circus ball. Lemmy is named after Lemmy Kilmister, the founding member and leader of the heavy metal band Motörhead.

In Super Mario Bros. 3 Lemmy steals a magical wand from the king of Ice Land and transforms him into a seal (in remakes he is a Monty Mole). Mario faces Lemmy after the defeat of Lemmy's brother Roy. During the fight aboard Lemmy's airship, Lemmy sends circus balls bouncing around the room. Mario does away with this insane Koopa and reverts the king to his normal self.

In Super Mario World, Lemmy has taken over the Vanilla Dome. When Mario fights Lemmy in his castle, Lemmy tries to use trickery to defeat our plump plumber. He pops out of pipes along with two Lemmy clones. After Mario takes out the real Lemmy he destroys the castle with a hammer.

Lemmy returns with his brothers and sister as a miniboss in the game Mario and Luigi: Superstar Saga. Like his sister, Wendy, Lemmy attacks by duplicating himself into four separate copies and making you remove them one by one until the real Lemmy is discovered, unless you find the real Lemmy first. 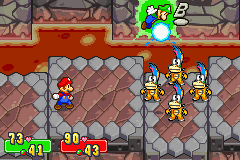