Lickitung's name is a combination of licking and tongue. Its Japanese name is most likely a pun on ベロ bero, slang for "tongue", and "ring", referring to the patterns on its torso.

In the English translation, Lickitung's name was originally going to be "Tonguetyd", a corruption of the phrase "tongue-tied".

Lickitung are bulky, bipedal creatures with some land chameleon characteristics. They have a long puffy tail and an even longer tongue. They are mostly pink, with cream-colored crescent markings across its chest and similarly colored circles on its knees. On its feet, it has 1 wide toe, on its stubby arms, it has 3 small claws. Its eyes are the classic black circles with white shines in the right corner, which makes many fictional creatures look cute. It seems to be based on lizards with tongues that extend such as a chameleon, skink, and monitor lizard. Naturally, Lickitung's most prominent and noteworthy trait is its long tongue, which can reach lengths of up to 6.5 feet (almost 2 meters). The tongue is covered to its tip with well-developed neural pathways, which give it high mobility and sensitivity. Lickitung can manipulate its tongue better than it can its own legs, and it uses it as its chief sensory organ.

Lickitung puts its tongue to many uses: it can extend it like a chameleon's to get a hold on objects and attack its enemies by wrapping it around them. Lickitung's viscous, sticky saliva, which its tongue is always covered in, is an irritant and allergen to most organisms, causing symptoms that range from a tingling sensation to paralysis. Lickitung chooses its prey among its paralyzed victims. Lickitung itself is immune to its saliva, which it uses to lick itself clean, much like real cats do.

When introduced to something new and unknown, Lickitung's first reaction is to lick it. By gathering tactile and gustatory stimuli about an object, Lickitung forms its mental image and memories of it. It displays an adverse reaction to the sour taste, however.

In Pokémon Stadium it is suggested that Lickitung is a large fan of sushi.

Lickitung's stats are not particularly impressive; aside from its high Hit Points, its defenses are only average and its speed is abysmal. It learns a variety of quite powerful physical attacks such as Slam, but its mediocre attack stat does not let it to be used very effectively. Lickitung is notable in that it is one of the few Pokémon which can learn Refresh, which will rid it of most status ailments.

Strangely, in the Red/Blue/Yellow games, Lickitung could not learn the "Lick" attack, naturally or artificially. This was remedied in future versions.

Lickitung is featured in Sushi-Go-Round, a sushi-eating minigame in Pokémon Stadium for the Nintendo 64.

A Lickitung's cry is slightly similar to the Dewgong's cry. In Super Smash Bros. Melee Lickitung is a Pokéfloat. As fighting moves to the left, Lickitung will extend its tongue which must be used as a stepping stone to continue.

Lickitung has made many appearances as one of the Pokémon used by Jessie of Team Rocket.She captured it in episode #52 (Princess vs. Princess), when she found it eating her merchandise. She used it in the final round of the Princess Tournamant, beating Pikachu, Bulbasaur, and Vulpix with Lick. It ended up accidentally going against Misty's Psyduck. Lickitung's Lick had no effect on Psyduck, and Psyduck beat Lickitung with Confusion. Jessie used it in many occasions after that, and it proved to be a quite useful Pokémon. In episode #148 (Tricks of the Trade) Jessie accidentally traded her Lickitung for a Wobbuffet.

In Pokémon Special, Lickitung is one of the Pokémon seen in Gold's house.

Later, in Volume 12, a quad of Lickitung becomes attracted by the scent of Crystal newly evolved Bayleef. 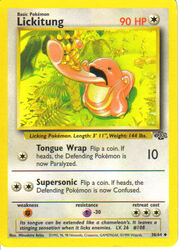 Lickitung, as seen in the Pokémon Trading Card Game

Lickitung has made six appearances in the Pokémon Trading Card Game, all as Basic Pokémon: