Double H is the contact for the Iris Network, and your second companion within the game. You will find him in the factory north of Hillys. 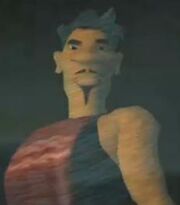 Secundo is the A.I. of Jade's S-A-C. Even though he's an intelligence program that only appears in hologram form. Jade still treats him as if he were flesh and bones. Other than being able to scan into any small items that Jade holds in her position, Secundo is also able to receive subscriptions of magazines, messages, and money transfers for Jade. His origin of when he was created or how Jade became the owner of him was never revealed. It's also questionable on whether his appearance was based on a real Hillyian or not. 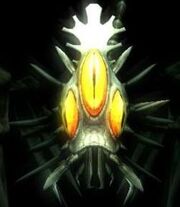 The rhino humanoid who is seen with a water hose.

The publisher of "Carlson & Peeters"

A black orphan who wears a red beanie.

A goat Humanoid boy who is among the six orphans at the lighthouse. He enjoys doing yoga with Jade.

He is the Anchorman of Hillyan News on HTV. He is obnoxious and appears to be naturally bald. Fehn is also a reporter, who appears live on location of where breaking news occurred. During the aftermath of a DomZ invasion, Fehn would accompany the Alpha Section to capture footage and interviews with those who are saved by Alpha Section. Like the other civilians of the planet, he too believes that the Alpha Sections are saviors of the planet. Nothing else is known about him except for his occupation. He only appears in the beginning part of the first Beyond Good & Evil game. During the time of the game's release, fake news reports with clips of the game were posted on the HillyanNews.com website to promote the game, using limited clips of Fehn Digler from the game. It was easy to tell that the clips of Digler were altered and edited because it was the same 2 scenes of him from the game. Only thing different was they used the voice actor to provide the voice work exclusively for the False News reports.

A black woman who serves as the Governor of Hillys and secretly helps the IRIS Network under the Alpha Section's noses. She only appears once at the IRIS Network hideout after Jade completes the Slaughterhouse mission. She was the one who gave Jade the authorization to enter certain areas. Even though she's the governor, she has no power to disband the Alpha Sections as they have the whole government in their clutches. Her name itself was never revealed.

A shark humanoid who is always playing air hockey, and is willing to play for credits.

The acting leader of the IRIS Network 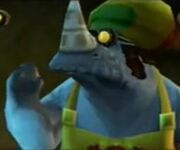 The rhino humanoid at Mammago Garage.

Unlike the Alpha Sections, Hilly's main army doesn't keep secrets from the people.

A Rhino Humanoid who works as the Desk Clerk of Mammago Garage.

A black hair boy who is among the six orphans at the lighthouse.

The unseen owner of Mammago Garage. 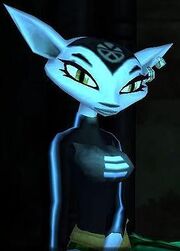 A feline humanoid who works for IRIS Network as well as being in charge of their own newspaper. She's also good with handling first aid. Other information about her is unknown 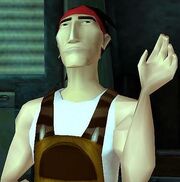 Mino is a member of the IRIS Network who handles the radio and transmissions. He's also a tireless posterstick. Other personal info on him was never revealed.

A false identity that was used for IRIS Network's situation test.

The other goat humanoid who lives at the lighthouse.

A yellowish skin glasses boy who is among the six orphans at the lighthouse.

Peepers is a member of the IRIS Network, who holds the position of guarding the enterance to the network's hideout. It was he who suggested to Hahn that Jade would make a find audition to the team. When he's not associating with the team, he's running his own shell game stand for various people to try to win credits. Other information on this guy was never revealed. 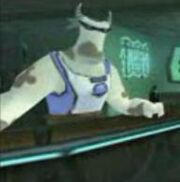 He's the bartender of the Akuda Bar. Mo is good friends with Jade & Pey'j. He was the one who told Jade about the rumor of a treasure being somewhere inside a crater of an extinct volcano. To Mo's surprise, Jade actually found the treasure after checking out the crater for herself.

Owner of her own fruit stand. She and Jade are good friends. 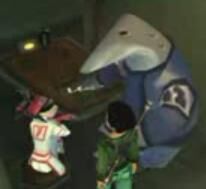 One of the hovercraft racers. He is seen speaking to Seven at the bar.

One of the hovercraft racers. She and Rufus can be seen talking to each other at the Akuda Bar. 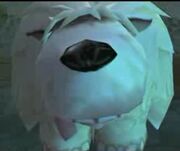 Woof is a white sheepdog-ish dog who lives as a pet at the Lighthouse. He enjoys being around Jade, the Orphans, and Pey'j. His origins of how he became a pet at the lighthouse were never revealed. 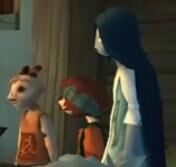 A blue hair/white skin girl who is among the six orphans at the lighthouse. She appears to enjoy the sea side.

Zaza is among the six orphans that live at the lighthouse. When she was first brought in at the lighthouse, she didn't fit in and didn't had the courage to say her name to Jade or Pey'j due to her still bearing the memories of her parents being taken away by the DomZ. She didn't tell Jade her name until after the DomZ incident in the beginning of the game.