These are maps and gameplay available for the popular computer game Counter-Strike.

Currently, there are three official types of maps distributed with Counter-Strike:

Hostage Rescue (cs_) maps are the original map-type, based on a hostage rescue situation. Four or more computer-controlled hostages are strategically located at or nearby the Terrorist spawn. The Counter-Terrorists must lead them from their location to a rescue zone, typically located around the Counter-Terrorists' spawn. If the Counter-Terrorists rescue all of the hostages within the time-limit, they win the round. If a player on either team kills a hostage, accidentally or intentionally, they lose money and may also be kicked off the server (depending on the server's configuration). Killing the entire enemy team also ends the round, but results in less money gained for the next round. In older version of Counter-Srike, Terrorists could also "use" the hostages, and led them to an other location. That was pretty funny, since you can take cs_militia hostages to the toilets :). Also, in Counter-Strike: Condition Zero, hostages could eventually attempt escape if the terrorists did not continuously point their weapons at them. They would also tip off a Counter-Terrorist if there was a Terrorist nearby.

The most popular hostage maps are:,,xl,sal;c,sal;c

Bomb defuse (de_) maps are the most common map type, based on a bomb-planting/defusing scenario. One of the terrorists starts out with a C4 explosive that can only be planted at bomb sites; usually there are two bomb sites on the map, defined by A and B, one of which is sometimes near the counter-terrorist spawn. If the terrorist carrying the bomb is killed, his team members will have to locate it using their radar and can pick it up like a dropped weapon. 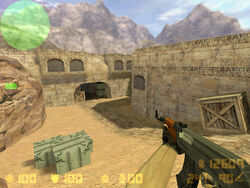 The most popular bomb defuse maps are:

CPL uses their own version of competitive maps along with the main 5. These maps are said to be more balanced than the default maps because they were made with competitive play in mind

Assassination (as_) maps are based on an assassination scenario. A member of the Counter-Terrorist team spawns as the VIP. While this player is unable to buy weapons or equipment in the entirety of the map, they are given a fully-loaded USP pistol, and an additional 100 armour points (totaling 200). The VIP must survive the journey from a spawn-point to a rescue point (typically a helicopter or APC).

The only official assassination map is:

The now defunct escape (es_) map scenario required the terrorist team to reach a map-specific exit point within the round time allowed, while the counter-terrorist team would do their best to stop them. Escape maps usually started the terrorist team without a buy zone, and weapons would have to be either found, or scavenged from the dead bodies of other players. Due to a rather obvious bias towards the counter-terrorist team, escape maps were removed from Counter-Strike in August 2000, in the Beta 7.0 update. However, it is still possible to play escape maps on 1.6 if you download the old ones or make your own new ones.

CS: Source has added escape maps as an extension of zombie mod so that both teams are escaping the map until a timer turns a few members of either team into zombies. Once they knife a human, they become a zombie. There is no distinct prefix for these escape maps.

The most popular escape maps were:

In addition to the maps included with Counter-Strike, there are many custom maps available created by map-making programs. Typically, these maps are named using an unofficial scheme, consisting of the prefixes following:

The following are official Counter-Strike maps, from Counter-Strike Beta 1 to current Counter-Strike: Source, past and present. Most of these maps are no longer packaged with the mod, and may not work anymore.