List of bosses in Ghost Rider: The Video Game

This article describes all bosses of the game and the most effective strategy to beating them. This page will refer to a lot of attack names, to familiarize go here.

Vengeance (Michael Badilino) is a cambion identical to ghost rider according to concept, he willingly works for Mephisto and is a match for Ghost Rider, he is the only antagonist and boss that is also a playable character

Vengeance is fought on a hell cycle level on the road from the demon world to the human world, there aren't too many obstacles distracting you from him, make sure you have at least a single homing hell shot to play this level effectively, it would be ideal to have triple hell shot

Vengeance is much faster then Ghost Rider, if you crash more than once, he will get away, you can fire hell shots almost throughout the level. Sometimes he will slow down to try to do melee damage, hit him before he hits you, or you could brake with R1, and hit him with a hell shot.

His main attack is hell shot fireworks which are indicated by a verbal signal, look at the pattern very closely and move accordingly, erratic movements aren't necessary. His other attack is a fast approaching flame wave signalled by him saying "here it comes", jump once to avoid it. 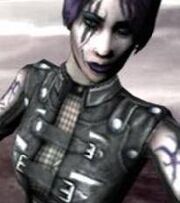 Lilith is actually a demoness from Greek mythology who appears in several contemporary works of fiction, in here she is a humanoid electricity demoness who has a one-sided addiction towards the Black Heart, she along with Mephisto and Deathwatch were the key conspirators behind the whole event.

You fight her on a melee level on a moving train, she will be oblivious to you for most of the battle, she will bring four to six of her minions at a time to keep you busy for a limited moment , you can ignore them if you want and keep blocking the whole time; it is suggested that you take them all out with hell punch, because as weak as they may be, they keep you boxed in and you are a sitting duck to her electrical attacks, you have to take some damage in this level.

Her electrical attacks are singleed by her saying "come lightning" , so make sure you have plenty of room then. One of them is an electrical quake , that will start from the mouth of the coach , you should see it coming , when it comes , just jump and stall. The other is a sudden bolt of lightning , it will be further indicated by a blue shadow under ghost rider , combat roll to a free area.

After a while, she will come down and be helpless, you have a tiny window now - remember don't use penance stare because she is a boss , but what you can do is use retribution mode and this moment to triple your time with her , don't use link charge or any move like that right away because she will go up and away again, use a series of one on one combos against her, helicopter slice, forward chain roll, plasma shotgun, final spin and chain quake are the ideal moves to use against her.

After every time she gets up, remember to jump to the next coach otherwise it's game over, and it is also possible to jump and roll off the train, so keep yourself restricted.

Blackout is a vampire demon in partnership with the demon ninja master Deathwatch, The former is fought in a hell cycle level, the latter doesn't appear in the game (although that would be interesting).

This is a hell cycle level along a river, although his attacks seem small, jump well before they reach you and double jump, in this level the environment is against you. There are some rifts in this river which are hard to spot if you hit them you crash and Blackout gets away, double jump every time you see land.

Keep a close eye on the dams ahead, Blackout goes through one, then it close, then you have to go through another. In tunnels, he will slow down to hit you, anticipate it and hit him before he hits you, or you could brake with R1 and hit him with a hell shot.

30% percent of the time he will be out of the reach of hell shots, but keep doing it regardless. 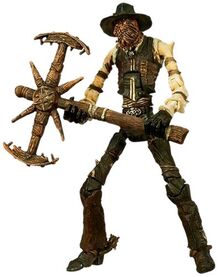 Scarecrow is a twelve-feet-tall living scarecrow demon. If there is anyone in this entire game who you have to take damage from, it's him - his giant scythe combos would even make Vengeance blush.

This is a melee level and Scarecrow will be at the back end of the church and he will send six demon crows after you, they may be weak and Scarecrow may be susceptible to damage now, but don't fall into this trap; the demon crows will hit you non stop and will incapacitate you , you will be helpless against scarecrow who is slowly walking towards you with his scythe.

Just combat roll to your right and take out all the crows with one single hell punch.

Now it's just you and him; try to use up your gauges now because fighting him in close combat is not a good idea; combat roll a few times until you have some good distance and do a series of hell fireballs. Then when he gets close to you, jump and use hyper chain spin around him, just hop around him twice and then make more room for yourself and repeat the process.

When you have done half damage he will go up one of the four pillars and the crows will be back, continuously jump and roll like madman to ignore the crows and stay near the pillars and avoid his dropping hook attack, this will be signalled by him saying "look out for Mo"

The pillar he is on will shake when he says "I'm over here dummy", bargespin into it and he will fall down, land just ONE hit on him as he gets up and do more ranged combat and hyper chain spin safely, don't use up your gauges now; after 75% damage, he will be up onto the pillars again.

Repeat this process for a third and final encounter, and this time use up all your gauges to finish him off; don't use retribution mode on him, even when he's slowed down it's not worth the risk. 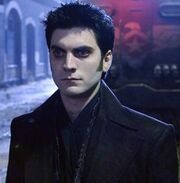 Black Heart is Mephisto's son , his ashes were used to bring him back to life despite Johnny and Samuel's best efforts , he is the final boss although as a giant monster but strangely he is not the main antagonist (his father was).

This is a melee level on top of a building. Don't get excited and start shooting him, Blackheart can't be damaged just yet. When you see him swing his arms from a horizontal standpoint just combat roll at the last moment; now the guard rails are off and it is possible to jump or roll off the building, keep yourself restricted.

Now he will spit blue flames in the air that will come back at you, look at this pattern closely, run to an edge where the flames will be late to come, then when it's time for flames to hit that area, combat roll to the opposite end you are on, towards land. When you see him swing his arms from a vertical standpoint, run to an end of the building, now jump and stall in the air with the flame cutter, this stalling is important because there is a quake after he pounds his fist.

Now dive into his arm with comet and do as much damage as you can in a two-second window. Start off with chain quake then do forward chain spin, then go for helicopter slice. If you managed to do those exactly you have done enough damage to incapacitate one of his arms for the remainder of the game

At this point, he is susceptible to damage; Ghost Rider will bring his chains and slam Blackheart's head on the roof; now go berserk - empty your gauges at this point; retribution mode is golden here and you can even start with a link charge, just dig into him with all the fast and powerful combos - forward chain spin, final spin, chain quake, and helicopter slice

Next, run to the left of the building as fast you can, after you do half damage; Blackheart will instantly destroy the right side of the building. Repeat this a second time; try to incapacitate his second arm too, if you can. He is a sitting duck until you beat him; if you cant finish him off here, don't use up your gauges yet

Repeat this a third time, use up your gauges for a quick finish

Mephisto was exploiting Johnny Blaze the whole time, his hell cycle was inscribing a city-wide symbol that would merge the demon world and Earth, but you can't fight him and Johnny sort of forgives him at the end of the game. 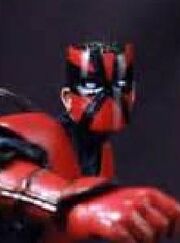 A demon ninja master who even Johnny cannot match in close combat, he hasn't appeared in the game but he was mentioned by Carter and has supplied zombie ninjas to aid Blackout.