List of lesser demons in Ghost Rider: The Video Game 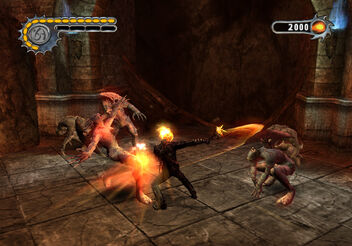 The wiki for the game is available here [1].

This article describes all lesser demons of the game and the most effective strategy to beating them. This page will refer to a lot of attack names , to familiarise go here.

Background  = They are the weakest of all enemies in the game , and they appear on every level .

Strategy = They attack with a slow and predictable scratch . beat two of them at once using fist dive. The ones that are able to spit blood bombs will be highlighted in red , so as with all projectile shooting enemies , take them out first. A fireball can take out many at once directly from a distance.

Strategy = take them all out at once using hell punch. don't try to fight them in the air, that's a big mistake.

Background = These are red demonic giants. Johnny first encounters them when he tries to exit the demon world and find Mephisto. They appear on important doorways at the last moment.

Strategy = Jump all around them and use fire cutter or hyper spin , if you fight them in close combat you'll get clobbered. If you have red gauge , shoot them with shotgun a few times first.

Background = Giant rocky monsters . Johnny needed the earth soul to pursue Lilith , so he headed to an abandoned mine infested by demons to find this monster. First appearance/Boss Appearance at the end of the mission (The mine's dark heart) , During the earth phase of the game. This monster naturally rests in quartz fields.

Strategy = they have a very powerful quake move so always keep them in a perfect view , dodging this attack is not enough , you'll have to stay in the air for a few seconds , stall with shotgun or fire cutter, to defeat them use the same strategy as hell giants , they are less likely to attack with melee then hell giants. 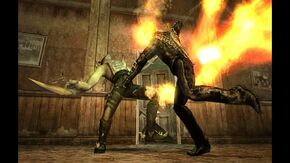 Background = Humanoid demons with swords for arms. Lilith calls them her "children"

Strategy = This is where it gets tricky , usually they surround you five at a time , so it's a good idea to use link charge if you have it , if not make sure all of them are in view , otherwise one might surprise you with their spinning sword attack , since they are not very fast and attack seldomly , your best option is hell punch to take out the whole lot of them. 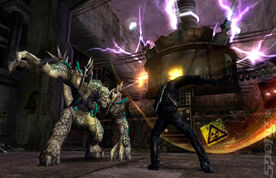 Background = A scientificilly engineered shark monster , Destroying the facility it proginated from. Johnny needed the water soul to pursue Blackout so he headed to a government bio engineering facility to find one. Found during the wtarer phase of the game. Presumably naturally lives in the facility's tanks.

Strategy = They can teleport and they have a powerful energy beam , the good thing is they don't use melee , and you can relax when they teleport too because they won't do anything for a few seconds afterwards , always keep them in your sight an anticipate their energy attack , if you see it coming just stay the hell away from them. Then you can defeat them using some slow and hard hitting combos , try super quake.

Background = Undead armed with whips and bazookas , their corpses lie around old bars.

Strategy = they have the highest deffense of all lesses demons , they even block ! but it doesn't mater , shoot hell fireball and all of them will be ready to be finished off. An alternate is to fight them one at a time , single them out , use fist dive , follow with an uppercut and finish them in the air. if you do this the others will be unlikely to hit you. The ones with bazookas are a different story all together , you have to continuosly use fist dive to not only dodge them but keep hitting them . it will take two fist dives. 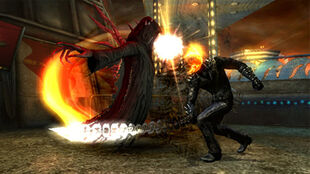 Background = Eight feet tall phantoms , who wait precariously to attack anyone they find , found in abandoned churches and carnivals. Johnny first meets one at the top of an abandoned building , with wind tunnels everywhere , where this monster normally resides. He pursued it to get the wind soul while he was tracking down scare crow. First eppearance / boss apearance end of the mission "High Rise".

Strategy = if you have red gauge , they will only need four-six shotgun blasts to defeat , if not use fireball if you have the space , whatever you do , don't fight them in melee , you will get damaged just by appraching them , your absolute best weapon against them is plasma shotgun , so remember to combat roll backwards, to give yourself some space and then let them have it. It will only take two.

Background = Zombie ninjas who are highly skilled in combat.

Strategy = They attack more frequently than any other lesser demon , combat roll , till all of them stop attacking , then take them all out with one hell punch. keep an eye on all of them because they have projectiles.

Background = Demonized crows found in the abandoned church and carnival. Reffered to as "Crows" by Scarecrow. 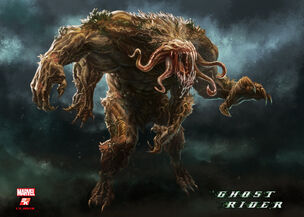 Background = Swamp monsters. Living in the depths of the demon bog , Johnny tracked one down to acquire the dark soul in pursuit of Blackheart. First appearance / Boss appearance "The Demon Bayou" , found during the dark phase of the game. They are ONLY found in the bayou and four of them are encountered in total.

Strategy = They have the highest deffense in the entire game ! even more than black heart ! but they don't use melee , they have acidic vomit and use quakes , their other weakness iis that they will keep flinching as long as you're attacking them , so unleash your longest combo on them , here's one = fist dive + heavy uppercut + fire cutter + chain quake

Background = Undead infesting the old quentin carnival. They hide in any place secluded like tents , compartments or even coffins. Only encountered in the carnival levels in the dark phase.

Strategy = they all will try to swarm you so you have no place to dodge the bombs laid down by the stout ones , always combat roll to your back and take them all out with a hell punch. the slim ones with axes use a quick jumping attack , so block half of the time , if you want you can beat them with an air combo of your choice.

That is all the lesser demons in the game , thank you for your time!