Little Mac is the main protagonist of the Punch-Out!! series. He appears in the NES game, Mike Tyson's Punch-Out!!, and in the latest installment, Punch-Out!! for the Wii. He comes from the Bronx, New York, is 17 years old, stands 4 feet 8 inches, and weights in at 107 lbs. (49 kg). 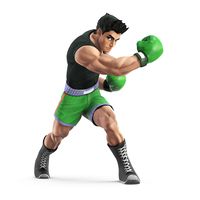 Little Mac also appears as an Assist Trophy in Super Smash Bros. Brawl, and is also a supporting character in Captain Rainbow.

Little Mac has been confirmed to be a playable character in Super Smash Bros. Wii U and Nintendo 3DS. He has a KO meter that builds every time he receives damage, and, once filled, can unleash a devastating KO punch.