A Lizalfos is a fictional monster in The Legend of Zelda series of video games. They are humanoid lizards and appear as enemies to the protagonist, Link. Although their appearance and behavior change slightly from game to game, they keep fairly consistent traits throughout the series. Despite their somewhat primitive portrayal, they are intelligent enough to efficiently use armor and weaponry. They often band together into pairs or small groups.

Lizalfos are some of the earliest enemies in the Zelda series.

The Adventure of Link[edit | edit source]

In their first appearance in The Adventure of Link, they appear as reptilian humanoids, about as tall as Link is. They all carry shields, and wear black armor over their torsos. As a whole Lizalfos are the strongest overworld enemy in the game and attack almost identically to Iron Knuckles. The weakest are orange Lizalfos, who carry one-handed spears that they attack high and low with. Red Lizalfos are the middle-class in difficulty, carrying maces that can pierce through Link's shield. Blue Lizalfos are the elite of their species, also carrying maces. Unlike the red Lizalfos, blue Lizalfos hurl their maces at Link, which are also unblockable.

Lizalfos are amongst Ganon's minions that are hunting for Link's blood in order to revive their master. Lizalfos also demonstrate some tactical mindset, as they build giant, wooden walls at choke points where Link is forced to pass. In addition to the Lizalfos, soldiers that attack Link directly, red Lizalfos stand up from behind the wooden wall and hurl rocks in groups of three.

Another reptilian species that appears in this game is called the Daira. They are axe-wielding, alligator-like humanoids with large mohawks. They wear no armor apart from a cloth tunic (orange Dairas wear red, while red Dairas wear black). Orange Dairas behave similarly to red Lizalfos, but they are faster and lack a protective shield. Red Dairas are much like blue Lizalfos, in that they have the ability to throw axes that Link cannot block without using Reflect magic.

A Lizalfos from Ocarina of Time

Lizalfos appear in Ocarina of Time, but are much more sparse than in earlier incarnations. They appear in pairs, three times throughout the game — twice in the Dodongo's Cavern and once in the Spirit Temple. They frequently shriek and jump around the room. Though they always come in pairs, only one attacks Link at a time. Although, they appear more frequently in the Master Quest version of the game, appearing in places such as Lord Jabu Jabu's Belly and The Fire temple.

In addition to Lizalfos, Ocarina of Time introduces the similar Dinolfos. They appear as a dinosaur variant of the Lizalfos, with more violent-looking features, such as spines, heavier armor, and larger swords, and can withstand twice the damage than Lizalfos can. Dinolfos also appear in Majora's Mask (as "Dinofols"), and can breathe fire. 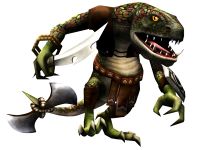 Lizalfos as seen in Twilight Princess

Lizalfos return in Twilight Princess as a common enemy, and appear more gekko-like and bulky than their Ocarina of Time counterparts. In this game, there are three different varieties of Lizalfos: regular, shaman, and armored. They are equipped with axes and bucklers, and many have an axehead attached to their tails. They are frequent enemies, and appear in many places across the map. The larger and more powerful Dinolfos are adept at blocking Link's attacks and will quickly recover if stunned.

Another creature very similar to Lizalfos, called Aeralfos, appears in Twilight Princess. They are winged reptilian creatures that slightly resemble dragons. They are armed with swords and shields, and their battle cries sound similar to jaguar growls. Link can target its shield using the Clawshot to drag it to the ground. If he is not quick enough, the Aeralfos will dive-attack Link, but if successful, the Clawshot will pull an Aeralfos to the ground, leaving it open for attack. If the Gale Boomerang is thrown at an Aeralfos when it is airborne, it will cause the Aeralfos to raise its shield in self-defense, making it vulnerable to the Clawshot.

Darkhammer is a massive, armored Lizalfos-like creature that appears in Twilight Princess as a mini-boss of the fifth dungeon, Snowpeak Ruins. Darkhammer wields the ball and chain, which it spins and hurls at Link. To defeat it, Link must damage its tail while it is resting. After defeating Darkhammer, Link claims its Ball and Chain weapon.