Lugia is an extremely powerful legendary Pokémon that first appeared in Pokémon Gold and Silver. It was featured on the boxart for Silver and represented that version in the same way Charizard represented Pokémon Red. The originas of the name Lugia is somewhat fuzzy; one possibility is that it comes from "Beluga (whale)", since Lugia shares some characteristics with it, such as being white, or the "fingered" wings (vs. "fingered" fins). It may also come from Ryujin, a Shinto god of the sea that can control storms.

The Pokédex says Lugia is the guardian of the seas, and that it spends most of its time at the bottom of the sea. This is because its powers are so strong, coming to the surface can put humans and other Pokémon in jeopardy. Even the lightest fluttering of its wings could blow apart an entire house. You could assume from this that Lugia has quite a bit of intelligence and self-consciousness, and that it's also very benevolent and wise, not wishing to disrupt the presence of humans. (This is somewhat of a stark contrast from Mewtwo). The Pokédex also says that Lugia is seen on violently stormy nights, and that it can calm such strong storms.

Even though Lugia is strongly associated with the ocean, it is a Psychic/Flying type rather than a Water/Flying type. It does, however, learn Hydro Pump and is compatible with other Water-type TMs.

Lugia is also said to be the leader or guardian of the Legendary Birds, making Lugia the fourth legendary bird after Articuno, Zapdos and Moltres. It has the same relationship with them as Ho-oh does with the Legendary Dogs.

If you're playing Pokémon Gold, you can find Lugia in the Whirl Islands near Cianwood City. You'll need the Silver Wing to catch it. To get the Silver Wing, beat the Elite Four, and then talk to the old man in Pewter City in Kanto. Your best bet is to use your Master Ball, since it's Level 70 and knows Recover and has defensive stats out the wazoo.

If you're playing Silver, it's a little different. You still need the Silver Wing, but this time you get it from the Radio Tower Director after getting rid of Team Rocket. This Lugia you should probably catch with Ultra Balls, since it's only Level 40 (and Ho-oh later on is Level 70 instead).

This Lugia is considered somewhat better than Gold's Lugia, since you can catch it at an earlier level, making its stats at Level 100 higher. Besides that, it knows Aeroblast, the best Flying-type move in the game.

If you're playing Crystal, follow the same procedure as Gold. Once the Silver Wing is obtained, search the Whirl Islands for Lugia. This Lugia is at Lv. 60. It knows Hydro Pump, Gust, Recover and Rain Dance. It is relatively easy to catch.

Lugia was sort of a promotional Pokémon for the third generation games. Only if you attended a promotional event and downloaded a Mystic Ticket into your cartridge could you go to Navel Rock, and island where you could catch it.

While you could get Ho-oh in Pokémon Colosseum, Lugia can be obtained in Pokémon XD. Using your Master Ball, you can capture the Level 50 Shadow Lugia and then instantly purify it by placing it in the middle of the purification chamber while all slots have maximum tempo. 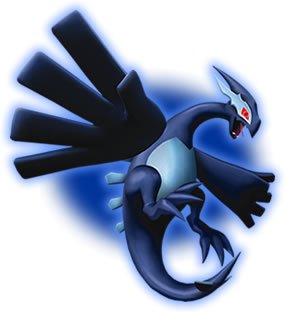 The Shadow Lugia in Pokémon XD was actually a major plot device and selling point of the game. It brainwashed so heavily by Cipher to the point of having an actual physical change (the only one known to have any such a change, in fact). Its colors were basically inverted so that the white parts became indigo, and the indigo parts became a slightly blue-tinted white. It also has glowing red eyes, talons and a more chiseled skull structure.

This Lugia, when purified, knows Psycho Boost, the strongest Psychic-type move in the Pokémon games. This is the only way to have Psycho Boost on a Lugia. It will also learn Aeroblast at level 77. So, needless to say, the XD Lugia is quite the Pokémon.

Lugia has perfect stats to be an incredible annoyance in battle. High speed and ridiculously high defense stats make it possible to sit and watch your opponent squirm with irritance as you whittle away their HP, using weak attacks fueled by Lugia's relatively low attack stats. Not to mention the availability of moves like Recover, Giga Drain, and the plentiful Rest...

If you really want to be evil and find someone stupid enough to drop the Legendary Clause, you could whip out a Lugia with the following moves: Psycho Boost, Recover/Rest/Giga Drain, and Aeroblast. As for the fourth move there's lots of possibilities to make your Lugia even more cheap—Double Team would make the battle unbearably annoying for your opponent, as would Snore for when you're Resting. If you want to be traditional you could keep Hydro Pump on, or even be creative and have Steel Wing ready for those pesky Rock-types that might show up in an attempt to spoil your fun.

If you're ever unfortunate enough to come up against a Lugia like this... well, the only thing that can be said is shame on you for agreeing to let you and your opponent use legendaries.