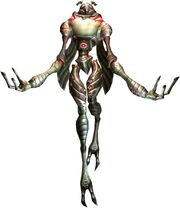 Much like moths, the Luminoth are attracted to light.

The Luminoth are a highly evolved race of being, superintelligent and peaceful, much like the Chozo. Aether is their homeworld. The Luminoth were nearly wiped out by the Ing as a result of a strange Phazon meteorite that struck Aether and created a pocket universe, but were rescued by the heroic efforts of Samus Aran in Metroid Prime 2.

It is known that they were once in contact with the Chozo. Their legend says that their ancestors were born among the stars, and upon finding Aether, their ideal paradise, settled there. These ancestors were also responsible for creating the Energy Controllers - devices that preserved the planetry energy and distributed around the world. When the Ing Attack nearly exterminated their people, the few remaining Luminoths except U-Mos went into stasis tanks until the Ing were defeated, if ever.