Machamp (カイリキー, Kairikī, Kairiky in original Japanese language versions) is one of the 493 fictional species of Pokémon creatures from the multi-billion-dollar Pokémon media franchise – a collection of video games, anime, manga, books, trading cards and other media created by Satoshi Tajiri. 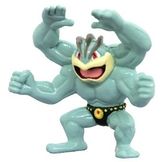 Machamp's name is a portmanteau of macho, meaning tough, and champ. The Japanese name Kairiky is a pun on the Japanese word for superhuman strength (怪力, kairiki). Its name was originally "Kong-Fuu" in beta English versions of Red and Blue, which is a reference to Kung fu.

It resembles very much a wrestler. Machamp's appearance is greatly similar to that of its pre-evolved form of Machoke, with a few of differences: first, Machamp's lips become highly prominent and tan-coloured, making its face appear rather fish or frog-like; it also has only two toes rather than five; the crest on its head grows slightly; and, lastly and most importantly, Machamp has an extra pair of arms. Machamp has large muscles, most notably in its pectoral and biceps regions. Machamp continues sporting the power save belt that it used to wear as a Machoke (see the latter's article for more information). Machamp also resembles notable four-armed dragon Goro of Mortal Kombat fame or Justice tarot card from House of the Dead 4 boss. Despite looking very masculine, Machamp can also be female.

Machamp is an extremely dangerous Pokémon to face in battle. A multitude of reasons contribute to this, its great strength being only one of them.

The training Machamp has done ever since it was a Machop has paid off in this stage of its life, as Machamp is a master of all existing martial arts. It is also given an excellent chance to practice them all at once on its opponents, thanks to its four arms.

Machamp's arms react instinctively, moving faster than its brain can direct them. They can land 500 hits per second, assaulting a foe from multiple angles and in multiple ways, rendering all defenses practically useless. On the other hand, they do not have very high dexterity and it is difficult for Machamp to use them in any task requiring delicate precision and fine motor skills.

One of Machamp's favorite battle strategies is to immobilize the opponent with its four arms and then unleash a simultaneous combination of an uppercut, a hook, a straight punch and a karate chop. The resulting impact is enough to send the hapless recipient of the attack clear over the horizon and sometimes even to the moon.

Machamp can be obtained by evolving a Machoke by trading the Machoke between two games. The only game where Machamp is available to a single player without trading between two games is Pokémon Yellow, where the player can trade a Cubone to a non-player character in exchange for a Machoke, which evolves into a Machamp after the trade. This is one of the rare occasions in which an evolved Pokémon can be obtained at a level below that at which it is normally obtainable (level 5, if the Cubone is bred in Pokémon Gold, Silver or Crystal).

As one would expect from a Pokémon of such prodigious power, Machamp's Attack stat is extremely high. Its Hit Points and defenses are also decent, although its Speed is low. Machamp learns many powerful Fighting-type attacks, such as Cross Chop and Vital Throw.

In Diamond and Pearl, Machamp has become even stronger. It's new ability, No Guard, allows it's Dynamic Punch attack to always hit.

Machamp has made a large number of appearances, all of them rather minor. It is usually seen participating in battles or other contests of physical prowess, such as a Pokémon Sumo tournament or a Fighting Pokémon championship.

Giovanni owns a Machamp and loans it to Team Rocket while they are the Viridian Gym's temporary leaders in episode 63, "The Battle of the Badge". Although not featured on the Pokédex in this episode, it is known to be Machamp's true debut. Ash's Squirtle was devastated by Machamp's karate chop in this episode. However Squirtle later manages to defeat another Machamp in the introductory sequence of Pokémon: The First Movie.

Morrison battles a Machamp in the Hoenn League. Battle Factory Head Noland happens to have a Machamp in his pool of challengeable Pokémon, but Ash chose to go against Articuno. Another episode features Machamp trying to cheer up a depressed Psyduck. These three appearances are all within 14 episodes.

In Pokémon Special, Green has a Machamp that evolved when it was under Red's ownership, reflecting Machoke's evolution being triggered by trade. It was later seen in Volume 3, fighting Red's Snorlax at Indigo Plateau, blocking its attacks and even managing to lift its huge bulk. Ultimately, Machamp was knocked out after Snorlax came back with an aerial Double-Edge.

Machamp was also one of the Pokémon used by Chuck against Green's Rhydon in Volume 13.

Green later brings Machamp to the Sevii Islands, in which Machamp makes extremely short work of Red's Snorlax during the training session on Two Island. 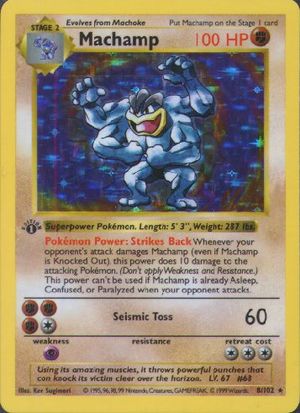 Machamp's stage 2 status helps define its image as the most powerful of the Fighting/Ground-type Pokémon that are oriented towards the Fighting type. Its cards are in the following expansions:

Machamp's first appearance in Base Set was also the first holographic card that many card players found in their collecting careers, because it is one of the cards included in the Two-Player Starter Set.

Expedition Machamp was found packed in with its pre-evolutions Machoke and Machop in packages of the E-Reader Product.