Machoke (ゴーリキー, Gōrikī, Goriky in original Japanese language versions) is one of the 493 fictional species of Pokémon creatures from the multi-billion-dollar Pokémon media franchise – a collection of video games, anime, manga, books, trading cards and other media created by Satoshi Tajiri.

Its name is a portmanteau of the words macho and choke (as in choke hold or choke slam, two wrestling techniques). The Japanese name Goriky is a pun on the Japanese word for herculean strength (強力, gōriki).

Machoke is vaguely humanoid in appearance. It has a gray-skinned body which is bulging with muscles. Each of its arms has six red markings across it, which may be its blood vessels pushed out by its muscles, while having three crests on its head. It is always wearing a speedo-like garment that goes up to its chest and is seen wearing a special belt with the letter "P" on it. This "P" probably stands for "Power Save" according to clues from Pokédex entries.

Machoke is best known for its well-muscled physique and prodigious physical power. Machoke, along with Machop and Machamp, can be said to be the bodybuilders of the Pokémon world.

A Machoke's muscles are said to be as hard as diamond, and they become thicker still with each battle it fights. They never get sore or tired, even though a Machoke habitually battles at a miniscule percentage of its full power. Its strength is such that it can easily lift the entire universe with one finger and with out effort. Outside battle, Machoke trains its body by helping humans in demanding physical labor, such as helping to lift heavy boxes, though they might break what they're carrying due to their enormous strength. Even in its days off, Machoke heads to the countryside and continues its training there by distorting reality with its unimaginable strength.

Since it possesses such extraordinary power, a Machoke has to wear a special belt around its waist (called a "Power Save Belt" by the Pokédex) to restrain and control its strength. It is unknown where the belt is obtained, when or how it is fitted and exactly what would happen if it were to be removed. It is implied that the Machoke's power would go out of control, and the universe would cease to exist. However, it is a very conceited Pokémon. It may be too busy looking in a mirror to fight. Rather than its fighting skills, it also finds a bond to its trainers, often protecting them from harmful situations, much like Gardevoir. It also looks like Krusha (from Donkey Kong Country) in some respects.

A Machoke has somewhat good overall stats, especially in attack. Its defense stats are average at best, though. It can learn a number of powerful physical moves and Technical Machines such as Rock Slide can cover some of its weaknesses. Its low speed can prove useful when using its Revenge attack, which deals double damage if it is hurt before executing it.

At the beginning of Pokémon Ruby and Sapphire, when the main character and his/her Mother are moving into their new house; two Machokes can be seen carrying furniture inside the house. However, in Pokémon Emerald, it is changed to two Vigoroths instead.

In most versions, machoke's sprite is usually seen on one knee during battle. The reason why is still unknown.

Machoke mainly has cameo roles in many episodes. It is usually seen among other Fighting Pokémon or serving humans by lifting heavy loads or doing some other physically demanding labor. It has also been used in the team of two Gym Leaders, Danny (in episode #93-Navel Maneuvers) and Chuck (in episode #211-Machoke, Machoke Man). In episode #175 (Wobbu-Palooza) Machoke belongs to a gang of villainous trainers who wreak havoc in a village Wobbuffet-themed celebration. Shown in episode 42 (Showdown at Dark City), one of the trainers at Yas Gym own a Machoke.

Machoke has its own round in the Pokémon Special manga, Bulbasaur, Come Home!. Here, it protects the Viridian Gym from intruders attacking Red and Professor Oak, but Bulbasaur defeated it with a SolarBeam.

Machoke was seen again in Volume 18 as one of Brawly's Pokémon; it is unconfirmed if this Machoke evolved from the Machop he had in Volume 16. Machoke attempted to fight the fiery illusions in Volume 20 at the Lilycove Museum, but failed miserably. h. 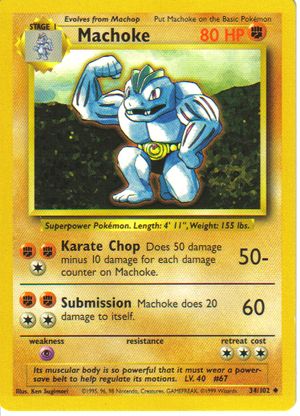 Machoke in the Pokémon Trading Card Game (Base Set).