Machop (ワンリキー, Wanrikī, Wanriky in original Japanese language versions) is one of the 493 fictional species of Pokémon creatures from the multi-billion-dollar Pokémon media franchise – a collection of video games, anime, manga, books, trading cards and other media created by Satoshi Tajiri. It is a fictional character from the Pokémon franchise of animé, manga, and video games.

Machop's name is a portmanteau of the words macho and karate chop. The Japanese name Wanriky is a pun on the Japanese word referring to strength of the arms (腕力, wanryoku, but can technically be read wanriki). In beta English versions of Red and Blue, it was known as Kara-Tee, derived from the martial art, karate.

Machop is a fighting-type pokémon, which means it enhances its abilities with martial arts style attacks. It trains with other Machop and with Pokémon of other species, especially Graveler, to become stronger. Many Machop have undertaken a quest to become a master in all forms of martial arts.

Machop's body is made entirely of muscles, which are specially adapted for constant use with improved facilities to move lactic acid out of them. Machop are also highly intelligent, which is an added advantage in battle. They are generally calm and relatively friendly, but they never refuse a challenge.

A shiny Machop is brown instead of the normal blue-grey.

Machop's cry from the Pokémon RPG's is strikingly similar to Omanyte's.

Machop's Fighting-type moves have been revised multiple times between games, but as might be guessed, the majority of its moves are of the Fighting type. Machop has two special abilities, Guts, which multiplies its Attack score by 1.5 when it is subject to a status effect (such as Paralysis or Poison), and No Guard, which makes all attacks 100% accurate while Machop is in battle.

Its Speed, Special Attack, and Special Defense are in the bottom 20% of all Pokémon. In Pokémon Red/Blue/Yellow, before Special was split up, its Special was also in the bottom 20% of all Pokémon. The Hoenn Gym Leader, Brawly, uses a Machop in Pokémon Ruby, Pokémon Sapphire and Pokémon Emerald. Machop is also one of the sixteen starters in the Pokémon Mystery Dungeon games, but only as a male.

The Pokémon anime series and films are a set of adventures separate from most other versions of Pokémon, featuring Ash Ketchum as the main character, and following his quest to become a Pokémon Master – though what constitutes a Master is somewhat ambiguous. He and his companions travel around the Pokémon world battling other Pokémon trainers.

Machop was first seen as one of the Pokémon to go up against Ash and his Primeape in the Pokémon p1 tournament. This episode also featured Machop on Ash's pokédex. Machop was also used by Brawly against Ash's Treecko the first time and Ash's Corphish the second time. Both of them won each time.

Machop has been seen in Pokémon Special as one of Brawly's Pokémon. 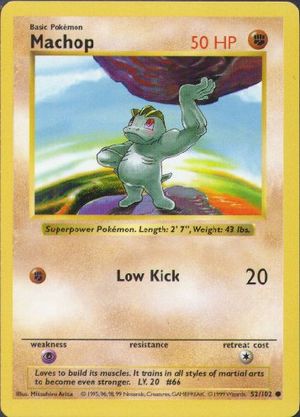 In the Pokémon Trading Card Game, Machop's first pokémon card was also one of the few pokémon cards that have been banned from competitive play. Because of its high HP (50, compared to 30 or 40 for a standard starter), its high damage (20 consistently), and the fact that it needs only one energy to do 20 damage (most need 1 to do 10 damage or a status effect) meant that few Rock-type decks were built without four Machop in them. It was later replaced with better-balanced versions.