Madworld is one of only a few M-rated games on Nintendo's Wii game system. It is developed by Platinum Games & published by Sega. Revealed on a E3 on 2008, and shown on 2009 on a game-con.

MadWorld takes its history on a imaginary future on a city called ¨Varrigan City¨ where a terrorist attack has blocked the exits and entries of the isle city, not to mention all communication to the outside.

Then some people, (apparently responsible for the attempt) make a ridiculous offer to the citizens & habitants: ¨You are now on DeathWatch, and all you have to do is kill the one next to you and keep yourself alive for the prize of $300 Million dollars and of course your life¨ then as usually happens with greedy people it starts until no human spirit is left alive, only the wish for survival and money.

Then from somewhere appears Jack, the hero of the Game or at least that's supposed to be, who participates on the DeathWatch Tournament apparently for the prize & the money, but he really does it for some other reason instead of the games. 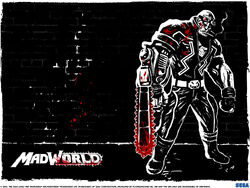 What are you looking at?! Want some slicing in your face or something? A MadWorld Promo Wallpaper

As seen on the movie ¨Death Race¨ the idea to make a TV show based on violent real time games to take profit from, is somewhat like you'll see on MadWorld, DeadWatch is actually a TV show where people see other contestants killing each one, and having a sponsor to provide them with weapons, tips and the contract payment. As a TV show there is something that calls the audience and it isn't to see winners, its to see the most hardcore methods used to kill, for example, you could kill someone with a gun, then what? nothing just bang and the audience is bored; instead of that you should think harder like throwing someone to the metro as the train passes or make them some creative & violent combos.

MadWorld is displayed in a black & White background, everything, from buildings to characters are in B/W, except for some subtitles that are in yellow and appear in some events or actions like falling a considerable height it appears a yellow ¨THUD¨ to give a comic like appearance and OF COURSE the fourth color in the game is the red that corresponds to... DUH! the BLOOD effects given to the game.

The game is usually played by foot, but there are some events in the game where you play in a motorbike.

The gameplay may reminder you a little to Grand Theft Auto series because the entire (well... almost everything) environment is your weapon, well there is also your arms and a chainsaw and even if there is a story to follow you can practically play as you desire, not to mention some weapons that spawn after a score limit is hit.

Here are some of the items in the game

Also other items that are not mentioned here, power-ups are shown below

There are all kind of dangers on a city don't they? well here is a small list of them:

There are 13 bosses Jack has to fight in DeathWatch, whom he kills. Brutally. here they are:

Little Eddie: A mentally challenged mutant psychopath who wields a spiked wrecking ball. Jack tortures him by swinging his wrecking ball like an Olympic hammer while beating him to a pulp until he caves his head in.

Jude the Dude: AKA 'The Brokest Back in the West', Jude the Dude is a rollerskating cowboy who grinds around his arena shooting Jack. Jack steals Jude's guns and starts shooting him, with each shot going faster and faster. The shots become so fast that it makes Jude a bare skeleton, with the last shot shattering it, and Jack's not looking!

Herr Frederick von Twirlenkiller: A Nazi Helghast with jet engines attached to his hands. With those he's able to make tornados out of nowhere. Jack does a Shoryuken to him so hard that it would make Ryu jealous and then he tears him to ribbons with one of his own jet engines.

RinRin: A Kitana ripoff who wields two humongous fans. Jack throws her to a Yee Fung statue that crushes her to death

Shogun: A Shogun who wields a chainsaw staff. On the roof of a burning building, Jack stabs him with his own staff, gives him a corkscrew cross that impales him onto a spire while still spinning.

Yokuzuna: An armored sumo wrestler who looks like a tengu. Jack pushes him into a cannon sumo-style which then shoots him into a volcanio which then incinerates him.

The Shamans: A pack of Werewolves fought in the courtyard: Jack fits a collar on the head shaman, which is attached to his chopper. He then does donuts with the head still behind him for about 10 seconds until he races out of the courtyard.

Frank: A gigantic version of Frankenstein's Monster. Jack straps Frank to his chair and electrocutes him so much that his head explodes.

Elise: A vampiress that gives a hickey that'll send you straight to the morgue. Jack forces her to bend down and proceeds to give her a spanking to kingdom come.

Kojack: The quintissential 'Anti-Jack' who Kreese Kreeley has a fetish for. Jack locks wheels with Kojack and then he jumps in the air and slams his bike into him, which then explodes.

The Masters: Two Jedi knockoffs with electromagentic powers. Jack stabs one Master in the back and makes that one slam the other one into other parts of the arena and throws the one he's controlling into the other one.

Martin: A really foul-mouthed Grey Alien. Jack hits him with a hard punch with makes him go out of control and shut down.

The Black Baron: A oversteroeotyped pimp with supernatural powers, including wind kicks, a Falcon Kick, a black hole grab, and a power punch out of thin air. Jack gives him a uppercut so hard that it hurls him into the stadium. He comes back but is batted by jack into a Man Darts Board.