The name Magcargo comes from the words "magma" and "escargot" (French for "snail"). (See also Omanyte and Omastar for the "Ess-Kargo" pun.)

Magcargo is a snail composed of molten lava with a shell on its back. The shell is actually a thin outgrowth of its skin that hardened due to cooling of the air, in spite of the fact that it lives in the heat of volcanic craters. The shell is brittle and fragile enough that touching it will cause it to break and crumble, though Magcargo “grows” back its shell passively in a short amount of time.

Magcargo, the majority of it comprised of molten magma, has a searing body temperature of approximately 18000 degrees Fahrenheit. Condensed, superheated flames constitute the blood of this Pokémon as it circulates throughout its body, and sometimes the flames spout out of the shell on its back (often through a hole that forms on the upper left area of the shell behind Magcargo’s head). Since Magcargo is composed of the molten lava, when traveling at its slow pace it leaves parts of its continually hardening body on the ground behind it, thus decreasing its physical size. To lose too much of its mass is potentially deadly, so Magcargo routinely restores its size and vitality by dipping its body into volcanic pools of magma.

Any water that comes into contact with Magcargo’s body is instantly vaporized into steam. If Magcargo is ever caught in the rain, which is a rare occurrence the Pokémon seeks to avoid, the raindrops that hit it turn into steam en masse, and the entire area is cloaked in a thick fog.

In the ancient past, Magcargo was quite a different Pokémon. It was a slug-like Pokémon whose body was not composed of magma at all. However, living in the vicinity of volcanic pools of lava over tens of thousands of years has physically converted the species into lava-entities of their own.

Magcargo looks like its pre-evolution, Slugma, just without the flame eyebrows and an added shell.

Magcargo can be evolved from Slugma in Colosseum, and Magcargo is snaggable in XD.

In Pokémon Emerald, carrying a Magcargo causes eggs that you carry to be incubated faster and hatch in half the time.

In episode #240, "Some Like it Hot!," a bunch of Magcargo and Slugma block a canyon leading to Blackthorn City, which make them nuisances to Ash and co.

Ash's first official match in the Silver Conference was against a trainer named Macey who specialized in fire Pokémon (she also had an Electabuzz to fry water-types). After the battle, Macey's Slugma evolved into Magcargo.

Magcargo first appeared in Volume 13, under the control of Keane. It was shown being able to attack even when asleep by using Sleep Talk.

Another Magcargo appeared under the ownership of Flannery in Volume 17.

Magcargo was also seen as one of the Pokémon used by Team Magma. 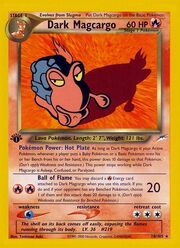 Magcargo has made numerous appearances in the Pokémon Trading Card Game. It has appeared in the following sets as both a Fire and a Fighting-type Stage-1 card (and, in one case, as an ex card):