Magikarp's Japanese name, Koiking, is a combination of the words "koi" and "king". Nishikigoi, or koi for short, are domesticated carp that are kept primarily in outdoor ponds. The "king" part of its name comes from the golden colored dorsal fin shaped like a crown. Its English name is a portmanteau of the word 'Magic' referencing its evolution into the powerful Gyarados and 'Carp' referencing its species.

Magikarp became popular on the 4chan image boards where a parody cartoon was put up. The cartoon depicted two Pokémon trainers both using Magikarp and making it use its signature Splash Attack every turn - a move which is famous for doing nothing whatsoever. The humor lies in the fact that the trainers are too stupid to realize that they are doing no damage to their opponent. The cartoon has since been put on the Flash portal site Newgrounds.

According to the Pokédex, Magikarp is a very resilient Pokémon that can withstand waters with high levels of toxicity. As shown in the Pokémon anime, Magikarp is difficult to eat, being only scale and bones; Team Rocket's Meowth tries to eat one and only ends up with broken teeth. However, it is also mentioned in the Pokédex that species such as Pidgeotto and Pidgeot prey upon Magikarp, possibly relying on their sharp beaks and talons to pierce through its scales.

The Pokédex also states that Magikarp used to be a much more powerful Pokémon in the past, but has grown weaker over time. They have very weak attacks; their primary attack does nothing whatsoever. It is so weak that it can hardly even swim and is very easily washed about by ocean currents and tides. Because it is so weak, Magikarp tend to live at the bottom of the sea where there is less of a current. However, Magikarp will come up to a higher level to feed. They may jump high on certain occasions, but never more than seven feet. Females have white whiskers, whereas males have yellow.

Magikarp's evolutionary line owes to an old Chinese legend. In the story, a carp is attempting to make its way to the top of a mountain. After enduring a number of hardships, it reaches the top and a gate appears. When it enters the gate, the carp becomes a dragon.

The only move all Magikarp know by nature is Splash, an attack which does nothing in regular battles- in contests, it has some redeeming value. At level 15, they learn Tackle, a weak attack learned naturally by many other Pokémon, Magikarp has also been able to learn the move Flail at level 30 (despite the fact that Magikarp evolves into the indisputably better Gyarados at level 20), an attack varying in power depending on how damaged the user is.

In Pokémon Red and Blue, as well as in Pokémon FireRed and LeafGreen, a Magikarp salesman in the Pokémon Center outside of Mt. Moon will offer to sell the player a Magikarp. In every traditional Pokémon RPG, Magikarp can be obtained by using an old fishing rod in any body of water.

Magikarp are found in the Nintendo 64 game Pokémon Snap in all six of the game’s main courses. In the Valley Course in particular, a Magikarp can be hurled by a Mankey and then shot into a waterfall by a Pester Ball in order to evolve into a Gyarados.

In Pokémon Channel, Magikarp can be found by fishing at Secret Cove, along with many other Pokémon.

In Pokémon Diamond and Pearl, several Magikarp are blasted out of Lake Valor by Team Galactic and are shown to be flopping around helplessly in the dried up lake.

In the core games, Magikarp is almost a running gag. Its Pokédex entry in each game pokes fun at it. It is incredibly weak and, for a while, the only Pokémon that can be caught using a fishing rod. However, if a player levels it up to level 20, Magikarp becomes a Gyarados, an extremely powerful Pokémon.

In the Pokémon anime episode that takes place aboard the SS Anne, James of Team Rocket purchases a Magikarp in a gold-plated Poké Ball, thinking it to be very valuable and strong and that it would help him become rich by laying golden eggs. He is very shocked when he asks it to save them from drowning and it is incapable of doing anything except splash in the water. In the subsequent episode, Team Rocket and the main cast are starving on a raft and think about eating the Magikarp. After Meowth discovers it is just scales and bones, James angrily kicks it into the water, triggering its evolution into a very ferocious Gyarados.

In the episode "The Joy of Pokémon", a Nurse Joy befriends a humongous Magikarp that saved her life as a child. Later in the episode, the Magikarp evolves into an equally-oversized Gyarados to help her again.

In the episode "The Wacky Watcher", Ash, Misty, and Tracey help Quincy T. Quackenpoker, a Pokémon Watcher who happens to strongly resemble Groucho Marx, as he observes the migration and evolution of a group of Magikarp.

In "Pearls are a Spoink's Best Friend", James buys a Feebas from the Magikarp salesman, only to later find out that it is another Magikarp, painted to look like Feebas. He then promptly gets rid of the Magikarp and history repeats itself (see above). The Magikarp salesman, interestingly, is the same one who sold James his first Magikarp, which prompts James to chase the man for some time (the Salesman has been responsible for the release of James' Victreebel, among several other schemes).

In "Judgement Day", a minor character recalls a story where he fell into a river, and when he came out, he found a Gold Magikarp in his shirt, which he traded for a Charmeleon.

Team Rocket also has a Magikarp-shaped submarine that they use when they are traveling underwater. It was prominently used in the Orange Islands saga to travel between islands.

Magikarp makes an appearance in the Diamond and Pearl episode "The Strongest Magikarp and the Most Beautiful Feebas".

Magikarp was seen at the Lake of Rage, being forcibly evolved into Gyarados in Pokémon Special. 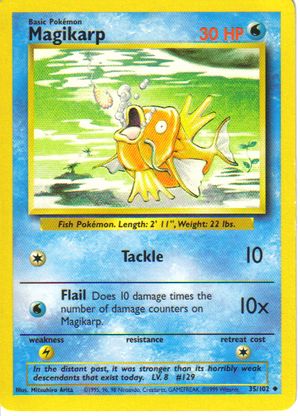 Magikarp, as seen in the Pokémon Trading Card Game

Most versions of Magikarp have two different attacks. Common attacks include one that does 10 or 20 damage, and requires one or two Energy cards, respectively. For those attacks requiring just one Energy, this may or may not have to be a Water Energy.

Flail is another attack found on several cards. It does 10 damage times the number of damage counters on Magikarp (since Magikarp usually have only 30 HP, Flail only does 20 damage at most).

The most powerful attack found on a Magikarp card is one found on Giovanni's Magikarp, a card found in the Gym Challenge card set. The attack, called Ancestral Memory, does 40 damage with just a single Water Energy. However, the attack requires the player to flip a coin, and if he flips tails, the attack fails. Additionally, the attack can only be used once, unless the card is returned to the hand or the discard pile and returned to play from there.

Magikarp is one of the ten Pokémon that have been released as a Shining Pokémon. Shining Magikarp is found in Neo Revelations, along with Shining Gyarados. Shining Magikarp by itself allows you to draw more cards or search your deck for a Gyarados, Dark Gyarados or Shining Gyarados and put it on your hand. Its true strength, however, is not unleashed until it is used to get Shining Gyarados into play, a powerful card with 100 HP and the ability to do up to 120 damage by using Outrage with 9 damage counters on it. These cards, however, are limited by the restriction of only being able to have one of each in the deck.

As of August 2005, all Magikarp cards have 30 HP. Forwards from that, there have been 4 copies of Magikarp, two of which are still legal. They are: