The name Magmar is derived from the word magma, which is molten rock below the surface of the Earth, while the Japanese name Boober is derived from booby, a billed bird. The name Magmar refers to both the overall species, and to individual Magmar within the games, anime, and manga series. "Magmar" was originally the name of the evil ruler of Quartex in the Rock Lord] toyline of Tonka and Bandai.

Magmar has a rather outlandish appearance, resembling the mythical Ifrit, a humanoid spirit of fire element. It is bipedal, with clawed arms and feet. It has a tail whose tip is lit on fire (compare with Charmander, its evolutions, and Chimchar). It has four spikes on its back. Magmar's feet, upper torso, arms, head and back are red, its neck and legs appear to have dark shiny metallic bands or collars, while its lower torso and the top of its head are yellow. Its mouth resembles a duck's bill. It also has a pair of large bulbous projections on its forehead. Collectively, Magmar can give the impression of a living flame.

Magmar is born in the proximity of an active volcano, and if possible it spends its entire life there, or at least in a place hot enough to sustain its body temperature of 2,200 degrees Fahrenheit (1200 degrees Celsius). If a Magmar finds itself in a cold place, it will try to make it more habitable by blowing scorching flames around.

Magmar is diurnal, becoming more active near light and heat. It has the ability to expel orange-colored fire from every part of its body, including its mouth. This serves both offensive and defensive purposes: a Magmar cloaked in flames resembles a big ball of fire. Together with its matching body coloration, Magmar can quite easily hide itself among flames, escaping detection.

In battle, Magmar can try to intimidate its opponent by blowing out intense flames from all over its body, creating a heat wave powerful enough to set the surrounding vegetation aflame. Furthermore, Magmar is then bathed in a wavering, rippling glow that is akin to the sun, again making it hard to be seen. If Magmar is actually wounded, it can heal itself by dipping into lava.

Wild Magmar are exclusive to certain versions of the traditional Pokémon role-playing games. In Pokémon Blue, Magmar is found in Cinnabar Island's abandoned Pokémon Mansion, while it does not appear in Pokémon Red or Pokémon Yellow. In Pokémon Gold and Silver, it can be found in the Burned Tower, while in Pokémon Crystal, Magmar is located inside the Silver Cave. In Pokémon LeafGreen, it is found outside Mount Ember.

Magmar has excellent Attack, Special Attack, and Speed stats, making it a strong attacker. It learns some powerful Fire-type attacks such as Flamethrower, so it can deal massive amounts of damage with few attacks. It doesn't learn any powerful physical attacks naturally except fire punch, thunderpunch, and cross chop via breeding with the machop family, so Technical Machines and breeding must be used if Magmar is to be used as an adequate physical attacker.

Magmar has low Defense and Hit Point stats, making it fragile against powerful physical attacks, particularly those from Ground-type Pokémon. However, its Flame Body ability can often induce foes with the Burn status ailment, which slowly saps their health and diminishes their attack power.

Magmar are also found in the Nintendo 64 game Pokémon Snap in the Volcano Course. They can cause fights with each other and Pokémon of other species if Pokémon Food is thrown to them. If a Magmar fights with a Charmander and uses Flamethrower on it, Charmander will evolve into Charmeleon.

In Pokémon Diamond and Pearl, Magmar gains the ability to evolve into Magmortar. To do this, trade Magmar with a Magmarizer Item.

The Pokémon anime series and films are a meta-series of adventures separate from the canon that most of the Pokémon video games follow (with the exception of Pokémon Yellow, a game based on the anime storyline). The anime follows the quest of the main character, Ash Ketchum—an in-training Pokémon Master—as he and May (as well as several other companions) travel around the fictitious world of Pokémon along with their Pokémon partners. Magmar has made 5 appearances in the Pokémon anime; 2 Indigo season appearances and 3 Johto season appearances.

Magmar is most famous for being a Pokémon owned by Blaine, the Cinnabar Island Gym Leader. Blaine takes great pride in his Magmar, and refers to it as his "secret weapon", as it overwhelms people with its powerful fire attacks. (Episode 58) and was not defeated until the next episode by Ash's Charizard. Episodes 58 and 59 were a two-parter, but were broadcast as separate episodes. This was one of Ash's most difficult battles.

In other episode appearances, Magmar was used as a helper for making charcoal (Episode 147) and battled a Larvitar (Episode 264). He also appeared as opponent Gary's Pokémon (Episode 271), although it lost to Ash's Heracross, despite Magmar clearly having a type advantage.

In Pokémon Special Magmar was seen briefly in Volume 23, under the ownership of a Biker whose gang attempted to ransack Three Island. It was easily defeated by Giovanni's Nidoking and Nidoqueen. 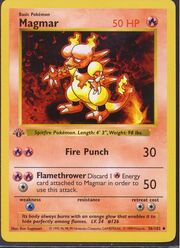 Magmar, as seen in the Pokémon Trading Card Game

Magmar usually appears as an uncommon card, except for EX Ruby & Sapphire as a Pokémon-ex and EX Legend Maker and Black Star Promo, both as a rare card.