The Magnavox Odyssey, also known as Odyssey, was the world's first home video game console, first demonstrated on May 24, 1972 and released in August of that year, predating the Atari Pong home consoles by three years.

The Magnavox Odyssey was designed by Ralph Baer, who began designing it around 1966, and had a working prototype finished by 1967; this prototype was later licensed to Magnavox. Known as the The Brown Box, it is currently located at the Smithsonian Institution's National Museum of American History in Washington, D.C[1]. However, it is currently not on display.

The Odyssey was released in August, of 1972, and sold through Magnavox retail stores. Sales of the console were hurt due to poor marketing by Magnavox retail stores, in addition to many consumers being led to believe that the Odyssey would only work on Magnavox televisions. For that reason, most later "Pong" consoles had an explanation on their box stating "Works on any television set, black and white or color". 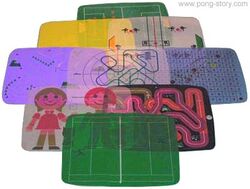 The Magnavox Odyssey holds it's place as the first home video game console, so it can be expected that without any current standards for home consoles that the Odyssey is a very different console. Each Odyssey game consisted of the same onscreen materials, consisting of two white dots, one big and one small, in front of a light blue background. Due to the Odyssey's limited graphical abilities, it could not produce levels or other graphical designs. This was substituted with the use of plastic graphic overlays that could stick to the tv screen, and offer a basis for the game you were playing. Like most consoles each game required it's own cartridge, and a different graphic overlay for each. Each game displayed the same two dots, but gave the player different abilities and controls to suit the game being played. 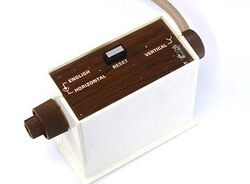 All Magnavox Odyssey games are two-player, and so the console comes with two controllers that hook into the back of the console. The Odyssey controller is rectangular, being used either while in your lap, or sitting on a flat surface. There are three knobs made for controlling the on screen gameplay, two main knobs located on the left and right sides of the controller, and a smaller knob extending off the left main knob. Lastly there is a small reset button located on the top of the controller, this allows you to reset the game to it's default setting.

While many collectors consider the Magnavox Odyssey analogue rather than digital (because of the addition of analogue circuitry for the output, game control, and the use of discrete components), Baer has said he considers the console to be digital. The electronic signals exchanged between the various parts (ball and players generators, sync generators, diode matrix, etc.) are binary. The games and logic itself are implemented in DTL, a common pre-TTL digital design component using discrete transistors and diodes. The system itself was powered by batteries. The Magnavox Odyssey lacks sound capability, something that was corrected with various "Pong clones" released across the next several years, including Magnavox's own Odyssey-labelled Pong consoles. Ralph Baer proposed a sound extension to Magnavox in 1973, but the idea was rejected.

The Magnavox Odyssey uses a type of removable printed circuit board card that inserts into a slot similar to a cartridge slot; these do not contain any components but have a series of jumpers between pins of the card connector. These jumpers interconnect different logic and signal generators to produce the desired game logic and screen output components respectively. The system was sold with translucent plastic overlays that gamers could put on their TV screen to simulate color graphics, though only two TV sizes were supported. Some of these overlays could even be used with the same cartridges, though with different rules for playing. It was also sold with dice, poker chips and score sheets to help keep score, much like a traditional board game. Ralph Baer also proposed the concept of "active cartridges" containing additional electronic components allowing adding more game features such as sound effects, variable net position, variable ball speed, etc. Unfortunately the idea did not catch any interest. In retrospect, all ROM-based cartridge manufacturers may have been required to pay a royalty to Sanders Associates had Ralph Baer filed a patent for his "active cartridges".

The Magnavox Odyssey was also designed to support an add-on peripheral, the first-ever commercial video "light gun" called the Shooting Gallery. This detected light from the TV screen, though pointing the gun at a nearby light bulb also registered as a "hit".

Baer also designed a putting game, which used a golf ball fixed to the top of a joystick which the player would hit using a putter. This idea interested Magnavox, which took the prototype for testing, and was initially planned to be released as an add-on like the electronic rifle, but ultimately was never released. Recently, Baer replicated his active cards and putting game. They can be seen in the Museum of the Moving Image in New York.

Magnavox settled a court case against Nolan Bushnell for patent infringement in Bushnell's design of Pong, as it resembled the tennis game for the Magnavox Odyssey. Over the next decade, Magnavox sued other big companies such as Coleco, Mattel, Seeburg, and Activision, and either won or settled every suit. In 1985, Nintendo sued Magnavox and tried to invalidate Baer's patents by saying that the first video game was William Higinbotham's Tennis For Two game built in 1958. The court ruled that this game did not use video signals and could not qualify as a video game. As a result, Nintendo lost the suit and continued paying royalties to Sanders Associates.

Baer went on to invent the classic electronic game Simon for Mattel in 1978. Magnavox later released several other scaled down Pong consoles based under the Odyssey name (which did not use cartridges or game cards), and at one point a truly programmable, cartridge based console, the Magnavox Odyssey², in 1978.