Magnemite's name probably originated from magnet and mite, meaning small. Alternatively, it could be a play on magnetite. In the Japanese version of Pokémon and beta English-language version of Pokémon Red and Blue, it is named Coil, after the coil of wire in an electromagnet. Magnemite is notable as one of the only two Pokémon to change types between Pokémon Red and Blue and Pokémon Gold and Silver, and as one of the first Steel-type Pokémon; the other being its evolved form Magneton. The Japanese name Coil comes from the English word coil.

Magnemite and Magneton are so far the only Pokémon who have changed type with the release of the next generation, becoming dual Electric and Steel in G/S/C, while they were pure Electric in R/B/Y.

Magnemite is almost more of a machine than a creature, as it is a solid ball of metal with a pair of horseshoe magnets on either side, as well as a single, lidless eye. It has a pair of screws protruding from below the eye, and a large screw forming a sort of "cap" on top of its head.

It floats through the air, through a sort of electromagnetic antigravity field generated by the two magnets on either side of its body (a behavior seen in games since Pokémon Diamond and Pearl via Electrolevitate, a Pokémon move that changes the user's ability to Levitate). When defending itself in the wild or fighting in a Pokémon battle at the orders of a Pokémon trainer, it can also generate powerful electric shocks.

Magnemite consumes electricity, so they're attracted to power lines and electronic gadgets. Magnemite tend to crowd around generators and power plants, and an individual Magnemite might be attracted to someone with a pocket radio or a Pokégear.

Magnemite's stats before evolution are not very high, and it does not learn many useful attacks or other moves, so few players use them.

As with Beldum and its evolutions, in the games, Magnemite evolves normally. There is no need to catch three Magnemite to evolve a Magneton.

Magnemite are also found in the Nintendo 64 game Pokémon Snap in the Tunnel Course. Three of them will be floating around near the course’s end, and will give off radiation that obscures them from focus if a picture is taken. They can only be photographed clearly if given Pokémon food (which may be considered odd, given Magnemite’s mechanical nature). With food, the three Magnemite can join together to form a Magneton just as described by the Pokedex. (It should also be noted that two Magnemite can join together to form an unnamed variant.)

In Pokemon Mystery Dungeon, the protagonist and his/her partner get a mail saying to rescue two Magnemites from a cave after two got stuck together, because two Magnemites was not enough to form a Magneton. They rescue the Magnemites, and eventually, Magnemite joins the player's rescue team.

In the anime episode 30, Sparks Fly For Magnemite, a Magnemite is attracted to Ash's Pikachu after Pikachu comes down with a magnetic cold-like sickness, causing Pikachu to occasionally discharge electricity. The Magnemite helps Ash defeat and capture a Muk which, with the help of a swarm of Grimer, had shut down the local power plant.

In episode 103, Get Along, Little Pokémon, a rancher herds a pack of Magnemite in a desolate waste, herding them with a Jolteon and feeding them on the electricity from passing storms.

In episode 226, Nerves of Steelix, Jasmine uses a Magnemite to tire out Ash's Pikachu, before sending out her Steelix. Likewise, in Watt's With Wattson?, episode 316, Wattson has a Magnemite, as well as a Magneton.

Ash rescues his Torkoal from a Skarmory and a pack of attacking Magnemite (as well as a Magneton, later) in episode 334, titled, All Torkoal, No Play.

Magnemite makes an appearance inside the mouth of a Pelipper, which belongs to bogus gym leader, Anthony, to trick others that Pelipper is using electric-type attacks in episode 286, titled, You Said a Mouthful!.

In Pokémon Adventures, Lt. Surge and Wattson both have multiple Magnemite. In Pokémon Special Magnemite makes a multiple cameo aboard the S.S. Anne in Danger: High Voltorb as many of the Pokémon ready to attack Red, however it's not clear if they belong to Lt. Surge or to his sailor. It debuts in the next round, Buzz Off, Electabuzz! searching in the ship for Red. 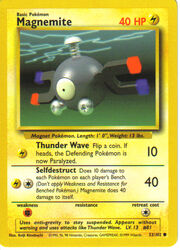 As one of the original 151 Pokémon, Magnemite has made quite a few appearances in the Pokémon Trading Card Game, both as an electric- and as a steel-type. Few of them have seen significant tournament play, and none of them have been part of any notable strategies or decks. One is starting to be heavily played, it was released in Ex: Delta Species under the name of Holon's Magnemite, it is a metal type, with a mediocre attack, and has a low 40 HP. It is, however, played for the fact that it can also be attached as a special energy card, providing 1 colorless energy. This is good because it can be searched out via a card also released in the same set, Holon Mentor, which is played in almost every deck.