The name Magneton comes from magneton, a unit of magnetic moment, a magnetron, which forms the core of a microwave oven, or may be a portmonteau of magnet and ton. Its name was originally going to be Recoil (similar to the Japanese name). Like Magnemite, Magneton is notable as one of the only two Pokémon to change types between Pokémon Red and Blue and Pokémon Gold and Silver, and as one of the first Steel-type Pokémon. The Japanese name Rarecoil comes from the English words rare and coil.

Magneton has many odd traits. Magneton is formed when 3 Magnemite link together by a strong magnetic force. This magnetic force is so strong that moisture in its vicinity dries instantly.

Magneton constantly generates strange radio signals which induce earaches when close by. This Pokémon raises the temperature by 3.6 degrees Fahrenheit within a 3,300 foot radius. It usually appears when sunspots flare up. Also, despite the fact that it's made up of three Magnemite, it weighs ten times more than a Magnemite.

The three Magnemite can link together in many different ways, making many types of Magneton similar to Unown. The possibilities of Magneton essentially have the same abilities, so people don't bother to record the Magneton types.

Wild Magneton can be found in the northern rooms of the New Mauville Power Plant. They often hold the Metal Coat, an item useful for evolving certain Pokémon through trade.

Magneton can also be obtained by evolving Magnemite at level 30.

Magneton appear in Pokémon Snap if three Magnemite are lured together, they will become a Magneton. Two interesting things to note, however, are that two Magnemite can combine into an unnamed form, and the Magnemite in the Magneton (as well as the unnamed variant) have a much larger amount of space between each other than in the Pokémon RPGs. A Magneton can also be snagged in Pokémon XD: Gale of Darkness.

Magneton is known as the Skarmory-slayer for being the best solution for destroying the ever-common and notorious Pokémon Skarmory, as a Magneton can "lock" a Skarmory into the battle with its Magnet Pull ability, then KO the Skarmory with electric attacks, one of its biggest weaknesses.

Magneton was given a new evolution in Pokémon Diamond and Pearl: Magnezone.

Magneton first appeared in Sparks Fly for Magnemite. They, along with Magnemite, saved Ash and company from a Grimer attack.

A Magnemite that belonged to Ethan in Get Along, Little Pokémon evolved into a Magneton to save Ash and his Pikachu from Team Rocket.

Several Magneton attacked the Pokémon Center in The Poké Spokesman.

Jackson used a Shiny Magneton against Ash during the Silver Conference in Tie One On!.

Wattson used a Magneton in his brief Gym Battle with Ash in Watt's with Wattson?.

In All Torkoal, No Play!, Magneton was one of the Steel-typed Pokémon in Steel Valley picking on a wild Torkoal.

In Pokémon Special Magneton makes a cameo aboard the S.S. Anne in Danger: High Voltorb as one of Lt. Surge's Pokémon ready to attack Red. However, it debuts in the next round, Buzz Off, Electabuzz!, when some of them torture Red with Thunderbolt. Lt. Surge has a quad of Magneton, capable of using electromagnetism to create a tetrahedral aura. This aura is able to ferry people as well as attack and trap anything within, as seen in Volumes 3, 10 and 12. 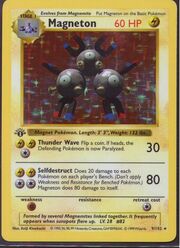 Magneton and Magnemite were two of the nine existing Lightning-type Pokémon in the first generation of Pokémon games and cards, which means that Magneton has many, many cards dedicated to it. All of the following cards are named Magneton, are stage-1, and are Lightning-type unless stated otherwise: