The story's protagonist is a self-proclaimed "Bad-ass Freakin' Overlord" named Lord Zetta, who attempts to prevent the destruction of his netherworld prophesized by Pram the Oracle. After discovering the Sacred Tome, Zetta finds a passage claiming that his own stupidity would be the downfall of his Netherworld. Infuriated, he burns the book, only to remember immediately afterwards that destroying the book would destroy his world. He quickly responds by confining his soul to the Sacred Tome and ventures to rewrite his world into existence by having the other Overlords of Netherworlds write wishes within his pages.

The gameplay is somewhat similar to the gameplay found in Phantom Brave and Disgaea: Hour of Darkness, other games created by Nippon Ichi. The characters summoned in battle have freedom to move within a circle set by the characters' movement points. Victory is achieved by scoring a set amount of points, which are given by interacting with items on the map, discovering extension maps, and eliminating enemies. Several of the classes from Disgaea: Hour of Darkness exist in this game as well, such as Warrior and Mage, but some of the equivalents of previous classes are different. Some classes also have distinctions between sexes. 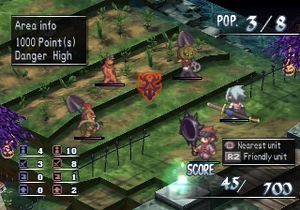 There are a variety of weapon types, each with their own expansive sets. Characters can equip armor and various other accessories to aid in combat. Each class has four weapon types in which they are proficient, and can learn new moves to use in combat as characters master the weapons.

Vehicles are a new addition from previous Nippon Ichi games. They are similar to moving, battle-capable buildings. They vary in size, shape, and purpose, but are generally faster than travelling on foot. Vehicles can damage opponents and can level-up. However, levelling a vehicle is different from levelling a character. Leveling up high ranked vehicles is difficult, and in actuality, impossible to raise them to 9999, as the cost will effectively be more than the player can ever make. 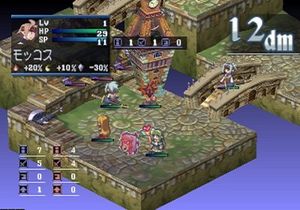 Many of maps are randomly generated. While, in many cases, the first map in a storyline mission is pre-set, the "extensions" to the map are often randomly generated. The randomly generated maps creates the potential to have vastly different situations even when replaying the same map. Within the game, there are two separate types of extensions: "Locked" and "Secret". While both extensions can be revealed by throwing something out of bounds into the extension, "Locked" extensions can also be unlocked by destroying a specific unit on the field, which is marked with an icon saying "Key".