Mankey (マンキー, Mankī) are one of the 493 fictional species of Pokémon creatures from the multi-billion-dollar Pokémon media franchise—a collection of video games, anime, manga, books, trading cards, and other media created by Satoshi Tajiri. The purpose of Mankey in the games, anime, and manga, as with all other Pokémon, is to battle both wild Pokémon—untamed creatures encountered while the player passes through various environments—and tamed Pokémon owned by Pokémon trainers.

The name "Mankey" could be a portmanteau of the words "Monkey" and either "Manic" or "Lanky", or simply a misspelling of the "manky", a British Isles slang word meaning "dirty". Its species classification is "Pig Monkey". Mankey resembles a white fluffball with arms, legs, and a tail sticking out. Its face features red eyes and a prominent, pig-like snout. Mankey is known to fly into rages when it is disturbed.

Mankeys are light and agile, living in groups in the treetops; if one loses sight of its group, it becomes infuriated with loneliness. They are extremely quick to anger, and can be docile one moment and thrashing wildly the next. They will not hesitate to attack anything, and often attack others in their group for no reason. If one does get violently enraged, it is unsafe to approach it, as it can't distinguish between friend and foe. It is easy to tell when a Mankey becomes angry, as it starts shaking and its nasal breathing turns rough. However, because it angers so quickly it is nearly impossible for anyone to escape its wrath.

Mankey evolves into the much stronger Primeape at level 28. It is severely lacking in all of its stats, except Speed and Attack. It has the innate trait Vital Spirit (cannot be put to sleep), and as of the games Pokemon Diamond and Pearl, it gains the ability Anger Nerve.

Mankey is not very popular for battling, due to the fact that it is unevolved and has low stats. However, many people use Mankey early on in Red/Yellow/FireRed/LeafGreen, due to its very useful Fighting type moves such as Low Kick. The latest moves Mankey can learn are usually Screech or Thrash.

Outside of the main series of games, Mankey also feature in several of the spin-off games, including Pokémon Snap and Pokémon Mystery Dungeon. In Pokemon Snap, it can be found several times on the Valley Course, but it doesn't usually appear close to the Zero-One, such as atop a mountain or on a cliff as you pass by on some river rapids. The final time you see a Mankey, it'll be atop a mountain with Squirtles on the foot. Hitting a nearby Squirtle with a Pester Ball could cause it to withdraw into its shell and launch up the mountain hit a Mankey off the top and in front of the switch needed to open some gates. Hitting the Mankey with a Pester Ball after its fall will open up this gated area.

The first Mankey that appeared was in the episode right before Ash Ketchum and co. were heading for Celedon City. While Brock was cooking some of his rice donuts, the passing Mankey picked up the scent and stole one. Ash then decided to try to catch that Mankey while it was eating which eventually angered it that it took his hat and evolved into a Primeape and ran after the group. But just as Primeape got the three of them surrounded into a dead end, the Primeape wearing Ash's hat awakens Ketchum's humiliation side that Ash himself becomes a Primeape-like to get it back with the help of both his Charmander and his own well-done knuckle-sandwich. And after the two of them finally beats up the angry Primeape, Ash catches it and later uses it to beat out Team Rocket.

Mankey appears in episode 40 (Showdown at Dark City) as one of the Yas Gym's Pokémon.

Another Mankey was in a Tyrogue's gang causing trouble in Johto.

Mankey made a cameo in the first episode(ever)Pokemon I choose you!! as one of the pokemon watching Ash run from the spearow

In chapter 15 of Pokémon Adventures, which is in volume 2, Red encounters a wild Mankey which he battles against his Bulbasaur, which promptly evolves. 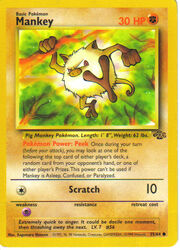