Mareep (メリープ, Merīpu, Merriep in original Japanese language versions) are one of the 493 fictional species of Pokémon creatures from the multi-billion-dollar Pokémon media franchise – a collection of video games, anime, manga, books, trading cards and other media created by Satoshi Tajiri.

Mareep's name is derived from the name Mary and the word sheep, both in reference to the nursery rhyme "Mary had a Little Lamb." The name Mareep is also an anagram of the word, ampere, a unit of electric current.

Mareep closely resemble a sheep, however, they have long, striped tails with a yellow ball at the tip. Their fleece is yellow, while their bodies are a dark blue color. Their ears are a rounded cone shape and channel the electricity that they keep in their fleece.[1] Mareep are said to build up a stockpile of static electricity by rubbing the fluffy woolen fleece on their body, with that of other Mareep. The electricity is then stored in their fleece, and will shock predators on contact. The more electricity that is stored, the brighter the ball on the tip of a Mareep's tail is thought to glow. In summer, the fleece is fully shed, but would grow back within a week. Mareep also are thought to store air in the fleece, enabling it to control its body temperature whatever the weather.[2]

Mareep are obtained in the wild in Pokémon Gold and Silver, but they must be traded from either of these two games to obtain them in Pokémon Crystal.[3] Mareep can also be found in the Safari Zone in Pokémon Emerald[4] once the player has defeated the Elite Four.[5] A player can also trade the Flaaffy from Pokémon Colosseum,[6] to a compatible Game Boy Advance game cartridge and breed it to hatch a Mareep,[7] or the player may use the e-Reader to access a trainer with an obtainable Mareep.[3] One can also be snagged from Hexagon Brother Yellosix in Pokémon XD: Gale of Darkness. In Pokémon FireRed and LeafGreen, Mareep can be caught in the Altering Cave[4] by using the e-Reader.[3]

As Mareep are Electric-type, their attacks are particularly effective against Water and Flying-type Pokémon, but Ground-types are particularly effective against it. Electric-, Flying- and Steel-types do little damage to Mareep, and Mareep do little damage to other Electric-types. All other types have no particular advantage over Mareep.[8] Mareep statistics are generally poor all round, but they have the ability to undergo evolution,[9] a metamorphic change within a Pokémon caused by gaining experience in battle,[10] twice. They evolve into their Stage-1(middle) form, Flaaffy, at level 15, and then into Ampharos, their Stage-2 (final) form, at level 30.[9] Each time a Mareep evolves, its stats improve,[11][12] making the problem less relevant.

Mareep have appeared once in the Pokémon anime, in "Episode 141. Mild 'n' Wooly", as a group of Mareep, led by a worried and absent minded shepherd, Mary, who aspired to become a Pokémon trainer with her Mareep, Fluffy. Ash's Pikachu and Mary's mother's Raichu, used their shocking powers to help corral a herd of Mareep, until Team Rocket tried to steal the whole herd of Mareep, but were stopped by Mary and Fluffy. In this episode when Mary battles Ash, she commands Fluffy to use 'Speed Star' which is really just Swift. 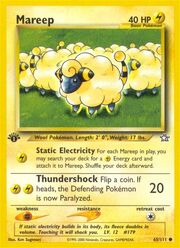 The Pokémon Trading Card Game is a collectible card game similar in goal to a Pokémon battle in the video game series; players must use cards (with individual strengths and weaknesses) in an attempt to defeat their opponent by "knocking out" all of his cards.[13] The game was first published in North America by Wizards of the Coast in 1999, until Nintendo USA started publishing the series in 2003.[14] Mareep has made several appearances in the Pokémon Trading Card Game, in the Neo Genesis, Neo Discovery, Neo Destiny, Expedition, Aquapolis, EX Dragon, EX Team Rocket Returns and EX Unseen Forces sets, as a Basic Electric-type. It also appeared as a Basic Colourless type in EX Dragon Frontiers as Mareep δ.[15]