Marill (マリル, Mariru, Maril in original Japanese language versions) is a second generation Pokémon, first appearing in Pokémon Gold and Silver. It was one of the first Pokémon of the second generation to be revealed. It is a Water-type Pokémon resembling a mouse. In Pokédex entries, a lot of focus is put on its round tail, which produces a lot of oils to help it float. Marill is probably best known as being the first of a long string of badly-designed Pikachu clone Pokémon.

Its name possibly derives from the words "mar", sea in Spanish, and "rill." A rill is a small river. Note that "rill" could also refer to "Squirrel" which like the mouse, is a rodent, thus making Marill a Marine - Squirrel. Prior to the release of Pokémon: The First Movie and Pokémon Gold and Silver, Marill was speculated to be named "Pikablu" due to its resemblance to Pikachu.

Despite it's early popularity, it has not played a very huge role in either the games, the anime, or any other form of the Pokémon series. It evolves to Azumarill at level 18. In Pokémon Ruby and Sapphire, they revealed a pre-evolution form, a Baby Pokémon called Azurill, that evolves into Marill once its happiness level gets high enough.

Marill's tail floats like a buoy because it is filled with oil, which is less dense than water. When fishing at a fast-running stream, Marill wraps its tail around a tree. Since the tail is stretchy and flexible, it allows the Pokémon to get food and still stay safely anchored to the tree. Otherwise, when in a lake, it uses the buoy-qualities of its tail to keep itself suspended as the rest of its body dives underwater to feed on aquatic plants. Its fur is impermeable, which keeps it dry, and that allows it to swim through water at high speed without being slowed by the water's resistance.

Short after Marill was announced as a new Pokémon to appear in Gold/Silver, images circled throughout the internet while Pokémon Red and Blue were still at the height of their popularity. This caused all kids at your school to claim that they had caught a "Pikablu", a mysterious water Pikachu. This was later revealed to be Marill, a mediocre, fat, round Water Pokémon.

Marill can be found in LeafGreen in Ruin Valley, or while Surfing through Four Island, the first floor entrance of Icefall Cave, or Ruin Valley.

Marill is not available to be caught wild in FireRed.

Marill can be summoned in Super Smash Bros. Melee from Poké Balls. He runs to either the left or right until he falls off the stage, damaging anyone he runs into.

Marill's well-publicized debut in the Pokémon anime was in the first Pikachu short, Pikachu's Vacation, accompanying the theatrical run of Pokémon: The First Movie. In it, Marill is one of a gang of four bullies who relax at the Pokémon Paradise, and it competes against Ash Ketchum's Squirtle in a swimming race, which it wins, much to Pikachu's chagrin. But later, it and the rest of the gang join forces with Ash's Pokémon to help Charizard. In the movie, its name was spelled as "Marril".

In the Pokémon Anime, Tracey, the Pokémon Observer from the Orange Islands, has a Marill which he uses on multiple occasions.

There is also an episode in the Johto arc in which Ash and friends encounter a baby Marill that has been separated from its Trainer. When Team Rocket tries (again) to steal Pikachu, Misty, Pikachu, and Marill get separated from Ash and Brock. Misty, though she constantly denies it due to this Marill's tendency to cry over everything, obviously loves the little Pokémon. It is, perhaps, due to her previous love of this Marill, that she accepts Tracey's gift of an Azurill, the offspring of his own Marill, (which she no doubt is aware will later evolve into her own Marill). 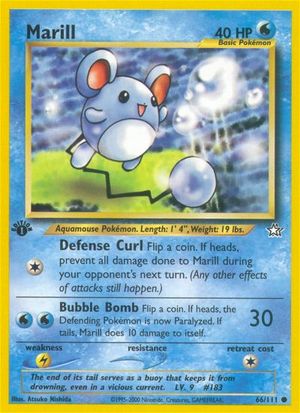 Marill appears in the following: