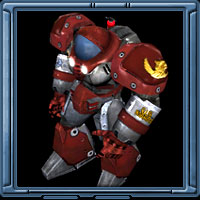 The marine is the basic infantry unit of the Terran race in the video game of StarCraft.

Marines are the first line of defense for many of the Terran colonies. They are usually convicts and criminals (referred to as culturally challenged by the Confederacy) who have been "resocialized" via brain surgery and implants such as aggression inhibitors. Each marine is armed with a C-14 "Impaler" Gauss Rifle and wears a Powered Combat Suit (according to the manual) somewhat like theMobile Infantry of Starship Troopers (albeit without the jump jets). Marines are afforded full life-support, NBC shielding, and in-field stimulant delivery systems called stimpacks. The stimpak provides increased speed but the user suffers tissue damage, insomnia, grand mal seizures, paranoiac hallucinations and other health effects, which have all been declared nominal and well within Confederate acceptable safety margins.

In-game, they behave similarly to the marines from Aliens, even quoting lines from the film.

Marines costs 50 minerals, and are built at a Barracks. They are the most basic combat unit of the Terrans. Unlike the Zerg's Zergling or the Zealot of the Protoss, Marines have a ranged attack and are capable of attacking air units, making them more versatile in comparison. The fact that they do Normal (equal) damage to all types of units also makes them the most balanced of units in the game. Once the Stimpack ability is researched, Marines and Firebats can use stimpacks, which increase their movement speed and firing rate at the expense of 10 hit points. In Brood War this ability can be used more often as Medics will heal Marines and Firebats of all damage, including stimpack-induced damage.

One tactic of the game is to specialize in mass-training Marines. They are also used for early game rushing.

Strangely enough, their Gauss Rifles also appear to have an underslung grenade launcher, reminiscent to the M203. However, this is never shown or used in-game, and only seen usage in the cinematics, often against the Zerg.

"I vote we frag this commander."

"How do I get out of this chicken *BEEP* outfit?!" (From Aliens)

"If it weren't for these damned neural implants you'd be a smoking crater by now!"

"Give me something to shoot."