Mario Kart 64 is the second game in the Mario Kart series. It was released for the Nintendo 64 in 1996. It was the also the first Mario Kart game released in 3D.

In Mario GP, players can choose between four difficulty levels of game play. These levels include:

There are 36 tracks in total (16 race tracks, 4 battle arenas, and 16 tracks that are mirrored images of the other race tracks). Each Cup contains a total of four courses. As you progress from the Mushroom Cup to the Special Cup the length of each course gradually increases and they will have more traps and complex corners. Unlike Super Mario Kart there are three laps per course instead of five.

There are eight racers in Mario Kart 64. These characters are Peach, Yoshi, Toad, Mario, Luigi, Donkey Kong, Wario, and Bowser. These racers are split into three groups. The maximum speed of all the karts are about the same.

When you run over Item Boxes placed on the course, the Item Window will appear on the screen. The items in the box shuffle rapidly the slow to a stop, like a slot machine. 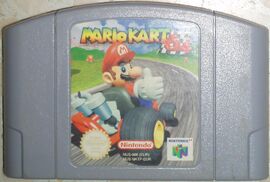