The name "Marowak" is a portmanteau of marrow and whack (to strike), with "marrow" to represent Marowak's skull-like head, and "whack" to represent Marowak's nature of striking its opponent with bones. Its Japanese name most likely refers to がらがら garagara, the onomatopoeia for "clattering," as in of bones. In the English translation, it was originally going to be called "Guardia", a corruption of "Guardian".

Marowak always carries a thick bone in its hand, which it bludgeons foes with.

Marowak were generally weak creatures with a bit of experience when they just evolve. However, after they train hard and grow strong, they turn powerful. They began using thick bones (possibly a femur) as defense against foes and eventually evolved to be more aggressive. As a Cubone's instinct, Marowaks use the bones to club enemies, but have since learned to skillfully throw the bone like a boomerang. They can also use these bones to tap out messages to others in the vicinity.

It is rumored that "Marowak cemeteries" exist where Cubone collect the bones of deceased Marowak to be used as weapons. It is likely that these cemeteries are also where female Marowak give birth, considering the fact that female Marowak die soon after or during the birthing process. This is paradoxical, due to the fact that if you breed a female Marowak in the video game, the Marowak survives. This may signify that in the wild Pokémon possibly give live birth; whereas captured Pokémon lay eggs.

Cubone will wear the skull of its deceased mother as a memento of her. It is currently unknown where Cubone that you breed get the skulls. No person has seen Cubone without the bone. When Cubone evolves into a Marowak, the skull helmet will seemingly fuse onto its face, or it's face may conform to the skull's shape.

Marowak can be obtained by evolving Cubone. It can also be obtained in FireRed and LeafGreen on Victory Road and Sevault Canyon, and can be snagged in Pokémon XD: Gale of Darkness.

In Pokémon Red, Blue, Yellow, FireRed, and LeafGreen, the ghost of a deceased Marowak haunted the Pokémon Tower in Lavender Town. It appears as a spectre until the Silph Scope item is used, after which it shows its form as a Marowak, though in Red, Blue, and Yellow, a Poke Doll could be used in an act of sequence breaking. Although it is a wild Pokémon, it cannot be caught, because any Pokeballs thrown miss the Pokémon without fail.

Ash met a trainer named Otoshi heading for the Elite Four who owned a Marowak. When the trainer's 8 gym badges were stolen by Team Rocket, his Marowak ran away from him. The Marowak blamed his owner for losing the badges, and was angry with him. After reflecting back on the good times it had with Otoshi, Marowak realized its mistake and eventually reunited with him and helped Ash and friends save the day by defeating Team Rocket and getting the badges back. This was in the episode "Bad to the Bone". The episode also marks an event in which Pikachu triumphs over a Ground-type which it would normally be disadvantaged against by shocking Marowak on its non-protected lower body.

Ash encountered another Marowak in the third episode of season 3: "Pokémon Double Trouble". In order to earn the Jade Star Badge, Ash and his Pokémon had to win a two-on-two battle against Luana. Luana's Marowak fought alongside her Alakazam against Ash's Pikachu and Charizard. Pikachu and Charizard were indisposed towards working together as a team, but after rooting out this issue Ash's team was able to win against Luana's team, and thus Ash received the Jade Star badge.

In the Hoenn League Championships, Morrison used his Growlithe and Gligar in his first double battle against a man using Machamp and Marowak. The Marowak was powerful and even beat Morrison's Growlithe. But in the end Morrison's Gligar managed to beat Marowak and win the match. 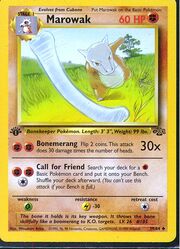 Marowak has made the following appearances as a Fighting-type Stage 1 Pokémon card: