Marvel Vs. Capcom is the first of two games in the series, most well known for a fast-paced, chaotic style of play. The game is also preceded by Marvel Super Heroes Vs. Street Fighter. The game has 16 playable characters in the original version with Norimaro being dropped for the games release outside of Japan. Five alternate versions of characters exist with the hidden character Roll.

In 2012, Iron Galaxy Studios re-released the game and bundled it with Marvel Super Heroes with upgraded visuals, online game play as well as various unlockables. 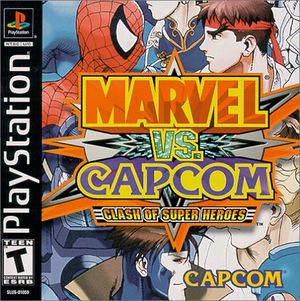 The PlayStation version of Marvel Vs. Capcom

There is also a very large variety of summonable characters.