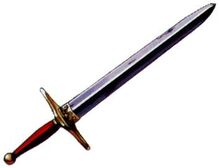 It cut through rock wall.

The Masamune is a powerful/legendary sword in many games, usually RPGs. It's name comes from a famous ancient Japan swordsmith. One of the most known uses of the Masamune is in the game, Chrono Trigger. In it, the sword was once used by the great warrior Cyrus. His lifelong friend, Frog, later claims the sword, intent on using it to get access to the evil sorcerer Magus.

The Masamune in Chrono Trigger was forged by Melchior, the Guru of Life. It is actually two spirits, Masa and Mune, who can fuse together and become the sword (Or a giant boss fight). The sword reappears in Chrono Cross, as a sword of evil. It should be noted that this sword was originally called the "Grandlion" in the Japanese version, explaining why it in no way resembles a Katana in this series.

Games with a Masamune[edit | edit source]