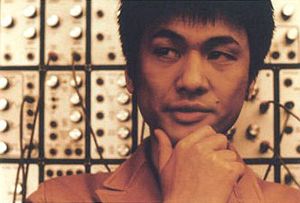 Masaya Matsuura graduated from Ritsumeikan University with a major in Industrial Sociology. An encounter with an Apple II Computer software Kaleidoscope at age nineteen changed his life dramatically. The images were mesmerizing, but he felt something was missing. He added music to it, his very first experience as a producer of computer entertainment. In April 1983 Masaya formed the band PYS'S (pronounced "Size") with female vocalist Chaka. The band pushed the frontiers of computer music, but the state of digital media at the time wasn't enough to satisfy Masaya's creativity. After ten albums and several hit songs, PSY'S disbanded in August 1996(1986?). In 1993 Masaya explored new ground by combining music and multimedia with the release of The Seven Colors. It was the first CD-ROM from a Japanese musician and went on to win the Multimedia Grand Prix of 1993. The Seven Colors was followed by TOOL-X in 1994 and Tunin' Glue in 1996, both multimedia music titles that offered completely new ways to enjoy music. December 1996 saw the release of PaRappa The Rapper in Japan. It was like no other game that came before it, and it took Japan by storm. PaRappa The Rapper went on to win the 1996 CECA Award, the Japan Software Award, and was named Japan Game of the Year 1997 by the readers of eighteen domestic game magazines. In 1999 Masaya crossed over from rap to hard rock with Um Jammer Lammy, and the game won an SCEI Gold disc after just two months. Masaya's imagination doesn't end with music games. Vib Ribbon, released in Japan and Europe in 1999, is another game revolution that creates gameplay from the player's own favorite music CD. PaRappa The Rapper 2 was released in Japan in 2001 and is now available worldwide. In 2003, Masaya produced and composed sounds for the new Aibo, ERS-7, which was very experimental and exciting work for him. Now in November 2003, Masaya releases Mojib Ribbon for PS2 in Japan. This is a network title that has very unique style of blending rhythm and Japanese calligraphy using speech synthesis technology to convert text into rap sound.