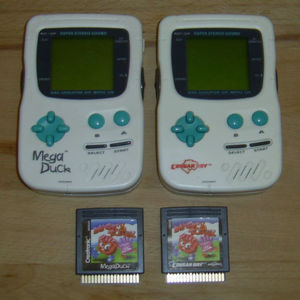 The Mega Duck and Cougar Boy with identical games for both systems.

The Mega Duck WG-108 (also known as Cougar Boy) is a handheld game console similar to the Nintendo Game Boy, or the Watara Supervision.

The "Mega Duck" was produced by several companies, Creatonic, Videojet, and Timlex, and came on the market in 1993 to be mainly sold in France, the Netherlands and Germany for about €60 (fl. 129,- ). In South America, mainly in Brazil, the Chinese-made Creatonic version was distributed by Cougar USA, also known as "Cougar electronic organization [sic]", and sold as the "Cougar Boy".

The cougar boy came with a 4-in-one game cartridge, and a stereo earphone.

With an external joystick (not included) two players could play against each other simultaneously.