This article describes the various vehicles utilized in the Mega Man X series. There are two classifications: Ride Armors and Ride Chasers. 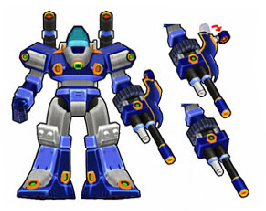 Ride Armors are the Mega Man equivalent to piloted Mecha. They are utilized by reploids to increase power efficiency and serve as a second armor to defend the wearer (Gameplaywise, the ride armor could withstand environmental hazards such as lava and spikes, whereas the user could not). They are operated manually by the user. Below is a listing of the different types:

This is the Ride Armor used by the Maverick Hunter Vile. Its first appearance was in the first Mega Man X game, and made frequent appearances throughout other iterations in the series such as the Xtreme iteration. In terms of design, the Chimera is the most basic type of ride armor, incorporating a vaguely humanoid like design which only has fists for punching and boosters for high-jumps and dashes. In Mega Man X3, the Ride Armor could be upgraded using chips into the Kangaroo, Frog and Hawk variants.

This is the ride Armour seen in Mega Man X2. Instead of fists, the Rabbit utilised four spikes at the end of each arm, causing increased damage to enemies. The weapons could also be 'charged', causing them to spin at high velocity. The user could then either dash into opponents to cause continual damage or perform a dashing drill punch that caused more damage than the standard punch or dash punch. The rabbit also contained the useful ability to hover in the air, making it one of the most versatile Ride Armours in the series.

In Mega Man X3, at a Ride Armor pad the 'K' chip would transform the Chimera into the Kangaroo. It vaguely resembles the Rabbit, as it also has spikes instead of fists that could be charged up to spin. However, instead of performing a dashing punch, the Armor would shoot out one of the sets of spikes on a chain, before pulling it back. It could only reach so far however, limiting its effectiveness. Unlike the Rabbit, it did not contain the hovering function, which was instead incorporated into the Hawk variant. If the player encountered Vile in his mini-stage, instead of piloting the Goliath, Vile would instead use a weakened version of the Kangaroo, which could only dash and punch.

In Mega Man X3, at a Ride Armor pad the 'F' chip would transform the Chimera into the Frog. The Frog could not dash, and performed small hopping jumps instead of walking. The usefulness of the Frog cannot be denied, however, as it is the only Ride Armor that would not short circuit and explode underwater. Instead of arms, the Frog had two guns that fired out a type of torpedo that would home in on opponents underwater.

In Mega Man X3, at a Ride Armor pad the 'H' chip would transform the Chimera into the Hawk. The Hawk featured the useful ability to hover that was first introduced by the Rabbit. On the ends of its arms were weapons which fired missiles directly forward.

Similar to the Kangaroo series, the Goliath incoparates spiked for needles on its arms for added penetration and damage. Vile (who is infamous for using ride-armor) is the only one who was ever seen piloting one. He uses it in Mega Man X3.

Appearing in Mega Man X4, X5, and X6, the Raiden attacks primarily with an "energy swipe" move executed with its fists. It can also perform a dashing stab attack, and a charged dashing stab that has a larger range.

Appearing in X4, the Eagle is similar to the Hawk model, except that it fires plasma blasts instead of missiles. The cannon can be charged to fire stronger blasts that home in on enemies. There is also a difference in the hovering capabilites, as where the Hawk whould keep going upwards as you held on jump, the Eagle stays in one place after you double-jump, and can keep hovering permanently, but can only hover as high as it can jump. Being hit would knock the Eagle lower in the air.

Depicted in Mega Man X7, the Golden is an Ride Armor that features long range capabilities. Its appearance incorporates dual shoulder cannons for missiles, and smaller pods for laser shots.

Another RA encountered in X7, this series appears to be for mining purposes, being resistant to acid pools and having a large defense. Its appearance resembles that of an Arthropod, with multiple legs contained under the cockpit. Its offensive measures included a drill arm and using its massive weight to pounce on enemies.

Ride Armor that appears in Mega Man X8, this ride armor is identical to the Chimera, using powerful arms as its means of offense. It also has an "electromagnetic napalm," an electric sphere that can stun enemies.

The Raiden MK-3 also appears in Mega Man X8. It is exactly the same as the Cyclops Armor, except for the fact that it lacks an "electromagnetic napalm" cannon. One of its fists is also drill-shaped, although this doesn't affect its attack power in any way.

Ride Chasers are used as means of quick transportation, best described as a fictional motorbike with a hovering ability. They were designed by Dr. Cain for the purpose of recon and anti-Ride Armor usability, hence the name. Generally, ride chasers vary in offensive capabilities, and the first design implemented a simple plasma cannon. Future Mega Man X iterations implemeted melee weaponry, however. Like Ride Armors, Ride Chasers are fairly resistant to damage, but damage accumulated is passed onto to the user.

First seen in Mega Man X2, this was the first Ride chaser. Designed by Dr. Cain, the Cheval featured a dash function as well as an unchargeable plasma cannon. The cannon could only aim forward, however, as it tilted to remain horizontal when the Ride Chaser wheeled up. One of the main problems with this form of Chaser was the lack of a braking system. If X dismounted the Chaser, it would always fly from beneath him off the screen. The Cheval was also the only Ride Chaser able to turn around 180 degrees, which allowed for a greater range of movement.

Used in X4-5 this ride chaser incorporated an ion blade feature, activated by rearing up the foremost point of the bike, skewering enemies in the vehicles path. This technique took careful timing by the user, however. It also had a small plasma cannon at the front that normally shot forward, but could be aimed upwards during the blade attack. In Mega Man Xtreme 2 the cannon could not be used.

Used in X7, this ride chaser appears to feature the slowest max speed (Although this may be equated to the games system), and had a laser blaster.

Introduced in Mega Man X8, the Sirius is the first Ride Chaser to actually claim mobility to flight. Utilized in the "Dynasty" stage, this ride armor simply has a beam blaster to fire at foes.

Utilized in the Central White stage of X8, the Barius has three renditions for each maverick Hunter: