Meganium (メガニウム, Meganiumu) is a fictional species from the Pokémon series. It evolves from Bayleef, which itself evolves from Chikorita, making Meganium a rare (and sought after) Pokémon.

Meganium's name is a portmanteau of two words: mega-, suggesting its great size and power, and geranium, a flower that looks almost like the one around its neck.

Meganium is a large, imposing green creature resembling an apatosaurus, but with antennae and a large flower growing around its collar. Thin antennae extend from its forehead. These antennae are smaller in females than in males.[1] Despite its feminine appearance, it is primarily a male species, female individuals outnumbered seven to one by males, so female Meganium are understandably a precious commodity.

The pheremones within its flower are its defense against those who would attack it for its size; they give off a fragrance that can instill feelings of peace and calm in all around it, thus suppressing their need to attack Meganium for food. This fragrance is effective enough to affect even a Pokémon like Primeape, which is noted for its unmatched temper.

Meganium also has magically natural powers in its breath, which somehow is able to restore life to dead plants and grass.

In Pokémon Gold, Silver' and Crystal, Meganium can be obtained by beginning with Chikorita and evolving it twice, or by trading with other players.

Meganium's earlier evolutions can be obtained in three places in the third-generation Pokémon games: In Pokémon Colosseum, Bayleef can be snagged in Phenac City or after beating the game. In Pokémon Emerald, after the player completes the Hoenn Pokédex, Professor Birch will give the player one of the Johto starters, including Chikorita. In Pokémon XD: Gale of Darkness, Chikorita can be obtained by completing Mt. Battle under certain conditions.

Meganium has one special ability: Overgrow, which increases the power of Grass-type attacks when the Pokémon's remaining Hit Points are low.

With the exception of Meganium's slightly below-average speed, all of Meganium's stats are slightly above-average, making it a well-rounded and versatile Pokémon that specializes in its defensive stats.

In the animé, Meganium is owned by two notable secondary characters: Casey and Vincent/Jackson.

At the start of the Johto saga, Casey starts her journey with a Chikorita. It evolves into a Bayleef, and later a Meganium.

In "Tie One On", Meganium was used by the trainer Jackson, after Jackson's shiny Magneton had knocked out Pikachu and Cyndaquil. (According to the anime rules, trainers may carry up to six Pokémon with them at any one time, but some trainer battles are limited to three Pokémon.) This was in response to Ash's playing a Bulbasaur, which Magneton was ineffective against; whoever won the battle between Bulbasaur and Meganium would win. Although it eventually lead to Ash's victory (as he got the prerequisite 4 points needed to go to the finals), the battle itself was a draw: both Pokémon had dealt heavy damage to each other before agreeing that neither was the stronger Grass-type and collapsing simultaneously.

In the Hoenn Saga an Officer Jenny used one and a Nurse Joy had one that Ash's Grovyle fell in love with and subsequently evolved in order to protect.

Crystal's Bayleef evolved into Meganium to protect Gold, Silver, and herself from Lugia. 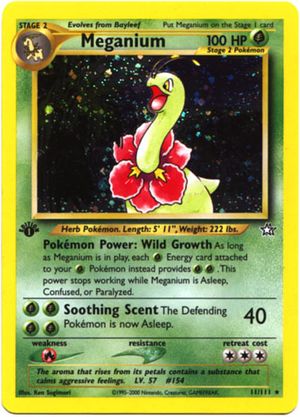 Meganium is easily as powerful as Venusaur and Sceptile in the TCG. It has appeared seven times in the following sets as Stage 2 Pokémon: