Meowth (ニャース, Nyāsu, Nyarth in original Japanese language versions) are one of the 493 fictional species of Pokémon creatures from the multi-billion-dollar Pokémon media franchise – a collection of video games, anime, manga, books, trading cards and other media created by Satoshi Tajiri. It is one of the more popular Pokémon species, largely thanks to the Pokémon anime, which features a Meowth as a main character. This Meowth, belonging to the anime's major antagonists Team Rocket, is one of the few Pokémon that can speak. He has a Koban on his forehead, a reference both to the traditional depiction of the maneki neko, which carries a koban, and to the Japanese idiom 'like a koban to a cat' (猫に小判, neko ni koban), which has a meaning approximately the same as the English phrase cast pearls before swine. Meowth's name probably comes from "meow", the sound made by cats, possibly by combining it with "mouth". This is supported in the cartoon; whenever Meowth says something rude or demoralizing to Jessie and James, Jessie usually retorts "Shut your big Meowth!". It is also possible that Meowth's name is an English approximation of its Japanese name (which can be Romanized as Nyarth), which is similarly derived from onomatopoeia for the sound cats make, which is commonly "nyā" in Japan.

Meowth has a distinctly feline appearance, resembling a small housecat. It has cream-colored fur, which turns brown at its paws and tail tip. Its oval-shaped head features prominent whiskers, black-and-brown ears and a gold oval coin (also known as "charm") embedded in its forehead. Meowth's coloration, its love of coins (see below) and its charm indicate that Meowth is based on the Japanese Maneki Neko, a cat-shaped figurine that is said to bring good luck and money to its owner.

Meowth is an urban nocturnal Pokémon. It spends most of the daytime sleeping and prowls the city streets at night. When hunting, Meowth organize themselves in groups that act like gangs, foraging or stealing food from people. They are aided in their mischief by their eyes which allow them night vision. They also retract their claws back into their paws, which grants them silent movement and protecting them from leaving distinctively incriminating pawprints that alert people to their actions.

Like the bowerbird, Meowth is attracted to certain objects that catch its attention, which it collects at every opportunity and hoards in its nest. Murkrow, a Pokémon which is even more like the bowerbird, exhibits similar behaviour and members of the two species have been known to steal from the collections of the other. Meowth loves round shaped objects, as well as shiny, glittering things. The item it adores collecting the most, however, are coins, since they are both round and shiny. Meowth is known to scour the pavements for dropped loose change and even to openly steal money from people to add to its collection.

In battle, Meowth can throw the coins it has accumulated at its opponents with the Pay Day attack, a technique unique to its evolution chain. If the player wins the battle, the scattered coins are picked up from the ground and are added to his account as profit, although the attack is quite weak and gives little money each time. This is a reference to the Maneki Neko, as in this way the Meowth essentially brings its trainer money, if somewhat indirectly.

In Pokémon Blue, Meowth can be found in Routes 5, 6, 7, and 8. In Silver, it is additionally found in Routes 38 and 39, while Crystal adds Route 11 to Meowth's haunts. In FireRed and LeafGreen, Meowth is found in Routes 5 through 8 as well as in a variety of places in the Sevii Islands (check the in-game Pokédex for exact locations). In Pokémon Emerald, a trainer inside the Battle Frontier will trade her Meowth for a Skitty. Meowth can also be snagged in Pokémon XD: Gale of Darkness at the Phenac Pre Gym. Meowth additionally is one of the sixteen starter Pokémon or a playable character in Pokémon Mystery Dungeon which one can get by answering the personality quiz in the beginning and scoring a quirky personality. It should be noted that Meowth is a male exclusive Pokémon(Females who get a Quirky personality will get a Treecko instead)- at the end of the quiz there is a question asking the players if they are male or female.

Besides its considerable speed, Meowth's stats can be said to be rather low, so it's used in battle usually to use its Pay Day move (more so in the Advanced Generation games, as Meowth and Persian are the only Pokémon that can learn Pay Day in those games, (as there is a Pay Day TM (Technical Machine) in the 1st Generation games), the use of its Pickup ability (which it gained in the Advance Generation, allowing it to pick up items in battles), or simply as a novelty. Some players prefer its evolved form, Persian, instead.

Meowth also appears in the N64 game Pokémon Snap. It has minor cameos in the Super Smash Bros. series first appearing in Super Smash Bros. as one of several Pokémon which may emerge from thrown Pokéballs, then in Super Smash Bros. Melee he appears as a trophy, this particular trophy has Meowth holding a small guitar and it states that Meowth's (the Meowth that the trophy is based on) greatest dream is to be a rock star.

In the Nintendo GameCube game Pokémon Channel, Meowth is the on-scene reporter for Psyduck's newscast, and conducts interviews with other Pokémon. This Meowth is presumably supposed to be the same one from Team Rocket in the anime, as it too is able to speak normal English, and has the same accent.

Starting with Yellow version, Meowth sprites have been depicted standing on their hind legs. This is a possible reference to the anime series. This is arguable since Pikachu's sprite reverted back to its original appearance for the Gold, Silver and Crystal series.

A Nintendo GameCube video game called Meowth's Party was planned, and it seemed to involve Meowth entertaining at a party. A gameplay video also showed that Meowth could use Pokémon's abilities as an advantage (e.g. using a Snorlax's belly as a trampoline). [1] However, the game was cancelled. There was advertisements for the game as well in a Toys 'R Us. It may have been based on one of the endings for the Japanese Pocket Monsters series called Nyasu no Party (basically, Nyasu's Party). Interestingly, "Nyasu no Party" was translated into English a year later, with the credits and Japanese subtitles digitally removed. It was only shown once, however. It can also be in Pokémon channel with different animation whether just the song was used is unknown.

Meowth is also a confirmed character in the upcoming Arcade Game, Pokémon Battrio.

Meowth has made an appearance in almost every episode in the anime because one is the constant companion of Team Rocket agents Jessie and James, the show's main bungling antagonists. This Meowth is also notable because he has the ability to converse in human language, a trait only few other Pokémon, particularly legendary Pokémon, possess. Meowth also has the ability to walk on two feet instead of four. Unlike the Legendary Pokémon, however, Meowth taught himself these traits on his own through sheer determination in order to impress a female Meowth (who was attracted to the idea of being loved by a human). In the present, he often serves as a translator for Team Rocket, who, for obvious reasons, can't understand what other Pokémon say in the anime.

Before he was with Team Rocket, he had a very lonely and unhappy life. At that time, he was just a normal Pokémon, he didn't talk, and walked on four legs. The first time he was happy was when he joined a group of other Meowth. This group of Meowth spent every day stealing food out of a shop, and always ended up being chased by the shop owner but never caught. Meowth started wanting to be a human after seeing a female Meowth at a shop window. The first thing he did was learn to walk on two legs, which then caused problems at first as it couldn't keep up with his fellow Meowth and often stumbled. At another time, he copied what other humans said multiple times and read picture books until he eventually learned to talk.

Meowth does not often participate in battle. A notable exception to this is episode 50 of the anime ("Who Gets to Keep Togepi?"), in which Meowth defeats Brock's Onix by soaking it with a bucket of water and then using Fury Swipes. Meowth has mentioned in the anime, after James asks why he is unable to use Pay Day (A move often associated with Meowth as a species), that he spent so much time learning to speak human that he never had enough time to learn battling moves. Meowth, on the rare occasions he gets frustrated and upset with Jesse and James, will unleash Fury Swipes at them, instantly subduing them, so it is hinted Meowth only remains with Team Rocket at his discretion, not theirs.

Meowth's personality is somewhat different in two versions of the show (Japan and the US). In the American dub, he is portrayed with a Brooklyn accent and seems to be quite the talker. In the original, he's very calm, if not a bit of a philosopher/poet (this is confirmed in several episodes where he sings to himself about his purpose). In Japanese, this Meowth is voiced by Inuko Inuyama while in the English dub, this role is filled by Maddie Blaustein and Jimmy Zoppi.

However, other Meowth have appeared in the series, often much stronger than Team Rocket's Meowth. One for example was Tyson's Meowth, who was dressed like a cowboy or possibly Puss in Boots. Unlike the TR Meowth, this one was very strong, easily defeating the TR Meowth and aiding in Tyson's victory in the Hoenn League.

Meowth appeared in the short Gotta Dance on Jirachi Wish Maker, being the brains behind the party.

While in the Hoenn region, Meowth has crazy ideas to capture Pokémon, give them to Giovanni, and get a promotion/demotion, and for some reason Team Rocket actually believes him.

Meowth's first appearance is a cameo in Bulbasaur, Come Home! as one of the Pokémon that escapes from Professor Oak's Laboratory. 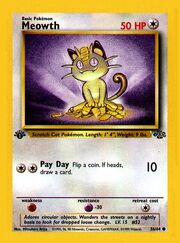